How Can We Create Psychologically Safe Workspaces?

Speakers came together to discuss what it means to bring your whole self to work, and how leaders can create welcoming spaces for all employees. Get highlights from the conversation here. 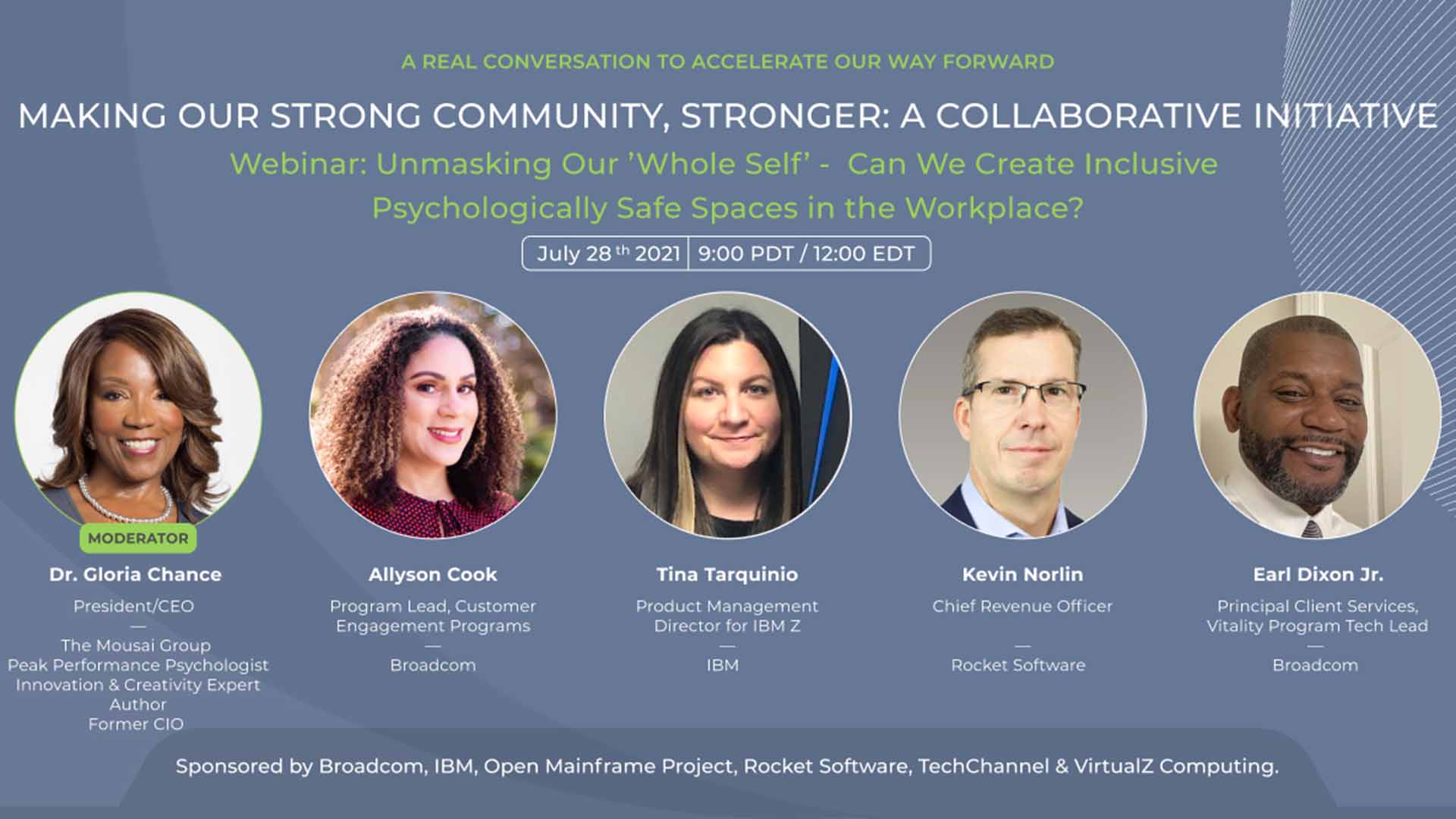 The pandemic has increased our mask usage in more ways than one. In addition to the face coverings we’ve grown used to seeing in our daily lives, as the boundaries between our professional and personal lives grow more and more blurry, many have taken to masking more of their identities in the workplace.

In the latest installment of the Making Our Strong Community, Stronger collaborative initiative on diversity, equity and inclusion, sponsored by Broadcom Mainframe Software, IBM, Open Mainframe Project, Rocket Software, TechChannel and VirtualZ Computing, speakers across the mainframe ecosystem spoke to how the pandemic exasperated more and more racial, gender and other inequalities.

Produced and moderated by Dr. Gloria Chance, psychologist and CEO of The Mousai Group, panelists came together to discuss the psychological impact of not being able to bring your “whole self” to work, the effect the events of 2020 had on professional relationships and more. Panelists included: The webinar “ ‘Unmasking Our 'Whole Self': Can We Create Inclusive Psychologically Safe Spaces in the Workplace?” and follow-up town hall discussion took place on July 28 and 29. The webinar is available to watch here. Continue reading to catch the highlights.

The Pressure of the Pandemic

Across all industries, organizations are increasing the amount of diverse talent they have, Dr. Chance noted during the webinar. However, one of the challenges that comes with that is employee retention.

“How do we create an environment where people can integrate themselves—especially their work and life—given the remote work that's come about based on the pandemic?” Dr. Chance says. “That's really the nuts and bolts of this conversation—psychological safety. What is that? It's the atmosphere that's created that allows others to fully show up as their authentic selves.”

Panelists explored what it meant to them to have a sense of psychological safety in the workplace. Those in positions of leadership explained the steps they were taking to create that atmosphere for their employees. However, there’s still work to be done across the industry.

Not everyone on the panel feels like they’re able to bring their full selves to work. Throughout Broadcom’s Allyson B. Cook’s 20-year IT career, she’s never felt comfortable bringing her whole self to work.

“When you're oftentimes the only one, or one of the few—whether it's a woman, or a woman of color, or Black woman, or working mom ... we can feel like we're the only one,” she says. “It's very isolating, and you don't know who will get you or who will understand you if you share and open up.”

Broadcom’s Earl Dixon Jr. had similar feelings throughout his career. The majority of his coworkers have been white, and he has been met with ignorance when he did bring his whole self to work. As a Black man who came from New Jersey, he experienced people asking him inappropriate questions about his upbringing.

“I'm not ashamed of anywhere I come from or anything I've gone through in my life,” he says. “But at the same time, I don't want to have to deal with that ignorance, so I don't bring my whole self to life in that aspect.”

It’s more difficult for people of color and those in non-leadership roles to fully remove their “mask.” As leaders in their companies, both Rocket Software’s Kevin Norlin and IBM’s Tina Tarquinio feel they can go to work as their full selves.

However, that hasn’t always been the case for Norlin. When he first had meetings with Bain Capital, the owners of Rocket Software, he felt like he always had to have a mask on, but as time went on he slowly was able to remove it. He now wants to empower others to do the same.

“People have to be in a position that they feel comfortable, and they can let their guard down,” he says. “Sometimes it just takes time and getting to know others again in a different environment and that can be a challenge in a virtual world.”

In Tarquinio’s case, she didn’t want to share certain details of her life at work. But the blurring of personal and professional lines caused by the pandemic caused her to need to remove her “mask” more often. However, as a leader in her space, she knew that if she brought her whole self to work more often, her staff would feel more empowered to do the same.

The pandemic wasn’t the only disruptor that came out of 2020. After the murder of George Floyd, conversations about race entered the workplace that were new to some, but all too familiar to others.

Many of Dixon’s coworkers, for instance, came up to him to personally apologize about what happened with George Floyd. “I really couldn't understand why [they were] apologizing to me because this is something that I've seen and lived through for quite some time, seeing all of the various murders of Black men that were not armed,” he says. It’s something that’s been happening for a long time, but he hopes that the conversations about what these things are and how we can understand them can continue between people of all races.

Not everyone on the panel had firsthand experiences like that in their own lives. Tarquinio says that it could’ve been easy for her to not say anything about what transpired, but she chose to speak up. “I think silence was way louder and said a lot more about me than speaking up and saying ... ‘I don't know exactly what this feels like for you, but I want to learn,’ ” she says.

Norlin says that the events encouraged him to speak up more for others both in and out of the workplace. “I think that it doesn't matter what level you are in an organization, you can stand up for what you believe is right even if it's uncomfortable and you take risk,” he says. “That's what I can do personally—if I see somebody being treated the wrong way or not being respected the right way, I can say something.”

Encouraging Others to Bring Their Full Selves

While the events of 2020 were difficult on all, much more awareness has been brought to the psychological impact of not being able to bring your full self to work. However, when asking to move office culture to be one where employees bring their whole selves to work, that puts the responsibility on marginalized individuals, Dr. Chance says.

To remove pressure from their employees, Norlin and Tarquinio hope to serve as examples when it comes to bringing their whole selves to work, as well as providing spaces where employees feel safe doing the same.

At the end of the panel, Dr. Chance closed with an explanation on the psychological dangers of wearing a “mask” to work. When people don’t have that safety of taking their “mask” off, they’re more likely to not admit their mistakes, blame others and be less likely to share their views, she says. When people move away from that and closer towards psychological safety, they’re more likely to learn from failure, admit mistakes, and share their opinions.

“​​We want you to encourage experimentation and support the exploration of ideas on your team,” Dr. Chance notes in her closing remarks. “That opens people up, and they will bring things to you, that may even surprise themselves.”