According to a 2022 ITIC survey, the zSystems mainframe and LinuxONE III recorded 3.15 seconds of unplanned per server/per minute annually—making IBM servers the most reliable

For the 14th consecutive year, zSystems, IBM LinuxONE III and IBM Power Systems have dominated with the best across-the-board uptime reliability ratings among 18 mainstream distributions while the Lenovo ThinkSystem servers posted the top uptime statistics among all x86-based server platforms for the last eight and a half consecutive years.

Some 96% of zSystems mainframes and LinuxONE III server customers recorded seven nines (99.99999%) of true fault tolerant reliability and availability recording a near-imperceptible 0.0043 minutes of per server unplanned monthly outages. This is the equivalent of 3.15 seconds of unplanned per server downtime annually.

To put these statistics into perspective: zSystems and IBM LinuxONE corporate enterprises spend less than the cost of a latte and a biscotti—just $7.18 per month on unplanned per server outages.

“The 0.0043 seconds of unplanned downtime per server downtime, is so fleeting we don’t even notice it and it has no perceptible impact on our daily operations,” says one vice president of IT at a national U.S. financial institution based in the Midwest. “As far as we’re concerned, the IBM Z delivers ‘zero downtime’ and that’s money in the bank,” the executive says.

A 93% of IBM Power Systems clients report the servers achieved a minimum of five and six nines of system reliability and availability. The IBM POWER8, POWER9 and Power10 servers posted just one minute each of unplanned per server monthly downtime.

The Lenovo ThinkSystem servers followed closely, scoring the highest reliability among all x86 hardware distributions for nearly nine consecutive years. A 92% majority of Lenovo servers attained five and six nines of reliability, posting just over one minute—1.10—of unplanned per server monthly outages. The Huawei KunLun and Fusion servers, the HPE Superdome and the Cisco UCS hardware (in that order), rounded out the top five most reliable server platforms.

Those are the results of the ITIC 2022 Global Server Hardware, Server OS Reliability independent web-based survey. It polled 1,550 corporations worldwide across 30 vertical market segments worldwide on the reliability, performance and security of the leading mainstream on-premises and cloud-based servers from July through November 2022. In order to maintain objectivity, ITIC accepted no vendor sponsorship.

The top server reliability vendors—led by IBM, Lenovo, HPE and Huawei—also delivered the strongest server security, experiencing the fewest number of successful data breaches and the least amount of downtime due to security-related incidents. 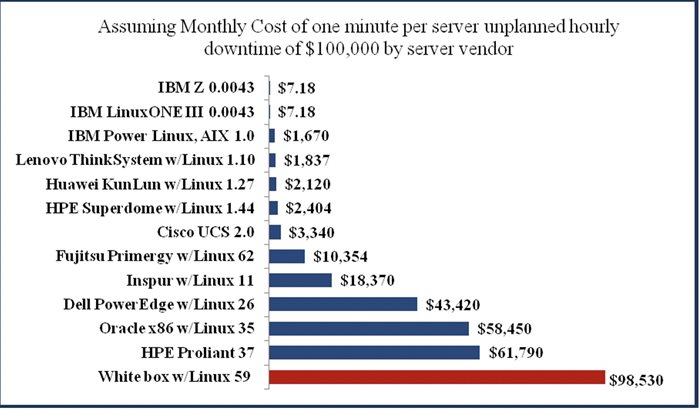 Other mainstream server distributions, like Dell, Inspur, HPE ProLiant and unbranded white box server customers, either maintained the same unplanned outage levels from ITIC’s 2021 Global Reliability survey or recorded slight, one to two minute per server monthly increases in additional server downtime during the past year.
These seemingly slight increases in unplanned downtime can have a significant and negative impact on the corporate bottom line. Any additional downtime can disrupt daily operations and they can be costly, particularly when outages involve multiple servers in on-premises datacenters as well as those running at the network edge and in virtualized cloud environments.

Availability, Cost and Other Survey Highlights

Among the other most notable survey findings:

Organizations have a near total reliance on their network infrastructure: servers, applications, devices and networks to transact business 24-7 irrespective of time or location.

This makes them extremely risk averse with little or no tolerance for downtime. Corporate enterprises need the most reliable, robust servers to ensure continuous, uninterrupted secure data access; maintain regulatory compliance and mitigate risk to an acceptable level.

In the digital era of interconnected intelligent systems and networks, unplanned downtime of even a few minutes is expensive and disruptive. Outages can reverberate across the entire ecosystem with devastating consequences. This includes datacenters; virtualized public, private and hybrid clouds; remote work and learning environments and the intelligent network edge. And peak usage hours have expanded; many organizations operate worldwide conducting business 24-7 irrespective of time zones.

ITIC’s latest Hourly Cost of Downtime survey indicates a single hour of server downtime can result in potential losses of $300,000 or more for 91% percent of mid-sized enterprises and large enterprises during a single hour. And among that 91% majority, nearly half or 44%—of corporations said hourly outage costs exceed $1 million to over $5 million.

As we head into 2023, inflation continues to rise and supply chain disruptions also constitute very real threats to infrastructure and network ecosystem stability.

Therefore corporations are well advised to build the most reliable server infrastructure. IBM, Lenovo, Huawei, HPE and Cisco servers continue to deliver the best performance, reliability, security, and the most economical TCO and fastest ROI among all server distributions.