The 2020 ITIC Global Reliability Survey shows the value of POWER9.

According to the 2020 Hourly Cost of Downtime1 survey, conducted by Information Technology Intelligence Consulting (ITIC), the cost of one hour of downtime now exceeds $100,000 for 98% of corporate enterprises. Moreover, 40% of large enterprises say the price tag for a one-hour outage can top $1 million or more. Specifically, one minute of hourly downtime calculated at $100,000 for a single server running a mission-critical application is $1,667. This makes high reliability and uninterrupted data access imperative.
1. Information Technology Intelligence Consulting Corp. (ITIC) 2020 Hourly Cost of Downtime Survey

The IBM Z® and the IBM Power Systems™ platforms scored the highest reliability and availability rankings among all mainstream server platforms in ITIC’s 2020 Global Server Hardware and Server OS Reliability survey. This is the 12th straight year the IBM servers topped the rankings.

ITIC polled 1,000 businesses from January through March 2020. All categories of businesses were represented in the survey respondent pool: 27% were small/midsized (SMB) firms with up to 200 users; 28% came from the small/midsized enterprise (SME) sector with 201 to 1,000 users; and 45% were large enterprises with over 1,000 users. No sponsorships were accepted.

Depending on specific configuration and deployment scenarios, IBM Power Systems servers recorded 1.54 minutes of per server/per annum downtime due to any inherent flaws or bugs in the underlying hardware. This is the platform’s best reliability showing to date.

ITIC’s latest survey data polled 1,200 global enterprises from January through March 2020. The study compares and analyzes the reliability and availability of 18 mainstream server platforms and one dozen OS distributions. To obtain the most accurate and objective results, ITIC accepts no vendor sponsorship.

The survey results reveal that IBM Power Systems running Linux* deliver up to 28x more uptime and availability than the least dependable unbranded “white box” servers. And the superior uptime of Power Systems hardware makes the platform up to 34x more economical and cost effective than the least stable competing server.

Least amount of unplanned downtime over four hours: Only 1% of Power Systems servers experienced unplanned server downtime of more than four hours due to inherent system or component parts failures

Highest server availability ratings: When server outages did occur, it typically took IT managers 10 minutes or less to get the systems back online with no data loss

Robust hardware and components: Less than 1% of clients experienced problems or failures within the first year of usage

Rock-solid security capabilities: Only 4% of Power Systems clients experienced downtime as a result of a security hack or data breach within the last 12 months 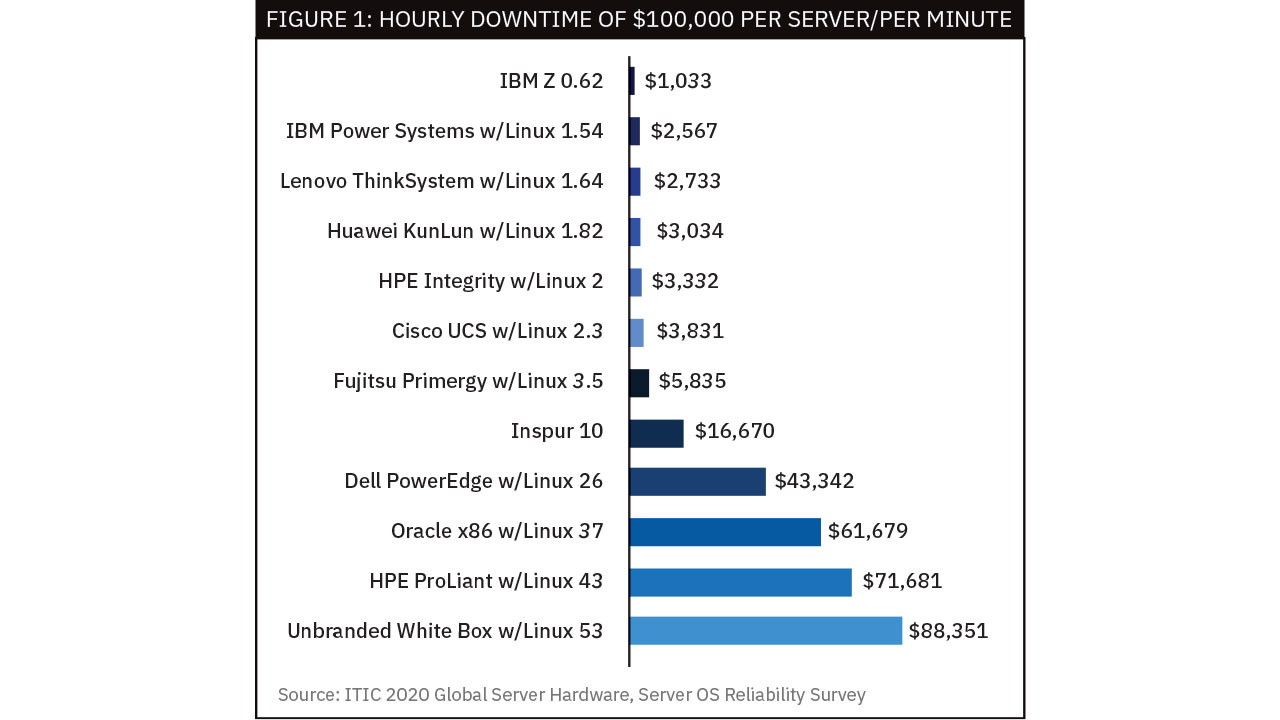 As Figure 1, (above) illustrates, IBM Z and IBM Power Systems recorded the lowest per server/per minute monetary costs among all mainstream platforms attributed to inherent flaws in the hardware. When businesses estimate hourly downtime costs at $100,000, the price tag for the 1.54 minutes of per server/per annum downtime due to server problems for the Power Systems platform is merely $2,567. In contrast, the least reliable white box server experienced 53 minutes of downtime per server/per annum, adding up to $88,351 in annual downtime costs due to hardware flaws.

For large enterprises in specific sectors (mainly banking, energy, government, healthcare, retail, transportation and utilities) the cost of a more severe outage can exceed $1 million or more per hour, which breaks down to $16,700 per server/per minute.

Downtime costs increase exponentially based on the number of affected servers and the enterprise’s estimate on the hourly cost of downtime. The potential monetary and data losses underscore the need for very high reliability of 99.999% or higher (Figure 2, below). 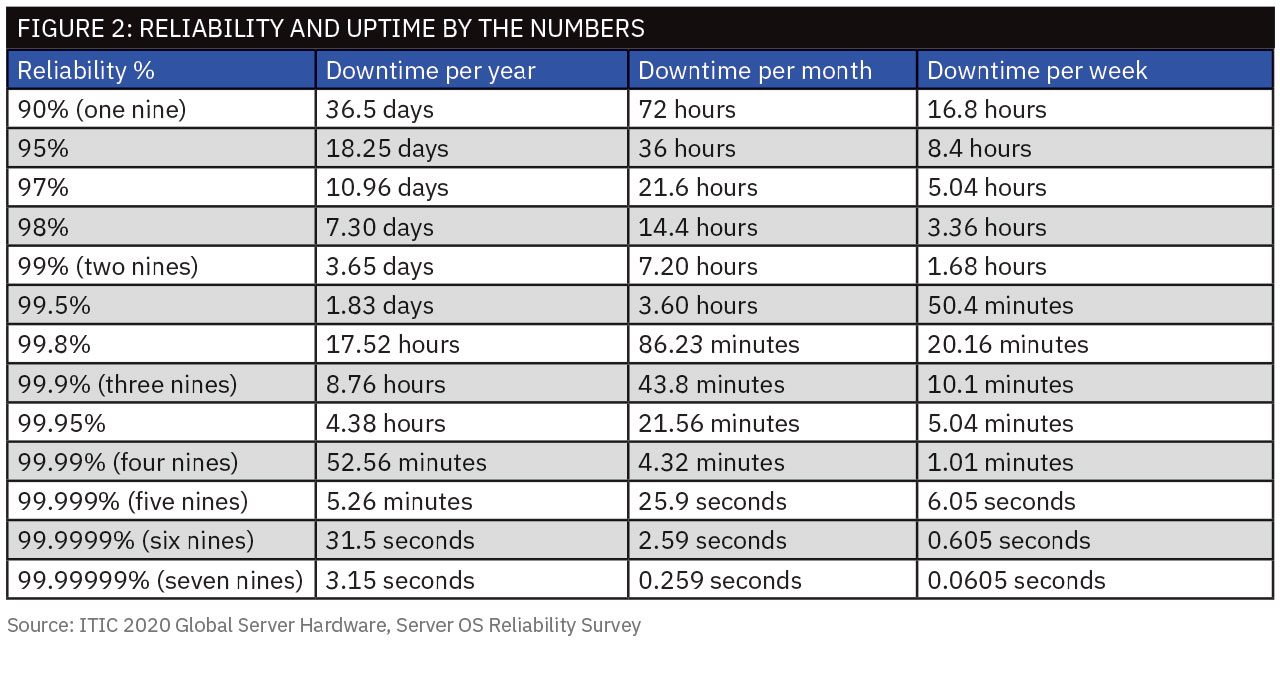 Recognizing and Fostering Greatness in the Power Systems Ecosystem

“What enterprises get for their money is a powerhouse scale-out server that’s purpose-built to support compute-intensive workloads and applications that are fine-tuned for today’s in-memory databases and multicloud environments.”

“IBM POWER9™ servers are very economical in terms of offering a low cost of acquisition and a very low TCO throughout the entire product lifecycle,” says Rob Enderle, principal analyst of the Enderle Group in Bend, Oregon. “What enterprises get for their money is a powerhouse scale-out server that’s purpose-built to support compute-intensive workloads and applications that are fine-tuned for today’s in-memory databases and multicloud environments.”

“POWER9 servers provide organizations with up to 1.5x speed and performance of POWER8® servers. Equally as crucial is that IBM builds security into every layer of the POWER9 stack, starting at the chip level,” Enderle says.

Server reliability and security capabilities are paramount for businesses. This is especially true in today’s business environment with largely remote workforces.

Enterprise clients likewise praise IBM for its technical service and support. “I rarely need to phone IBM technical support for anything beyond a simple support call, but when I do need to escalate a call, I get prompt attention from very knowledgeable engineers that are able to get to the root of the issue and resolve it quickly,” says an IT manager at a healthcare organization based in Louisiana.

More Than Speeds and Feeds

In today’s business environment, the performance of an IT infrastructure platform is quantified by more than speeds and feeds; it’s measured by reliability and cost savings as well. Learn more about the advantages of the Power Systems platform.