When it comes to reliability, there’s only one direction that matters: up.

ITIC’s independent web-based survey polled over 1,000 businesses worldwide from October 2018 through January 2019. It compared the reliability and availability of 18 different mainstream server platforms and a dozen different OS distributions. To obtain the most accurate and unbiased results, ITIC accepted no vendor sponsorship.

Depending on individual implementation, configuration and usage scenarios, the IBM Power Systems platform recorded less than two minutes (1.75 minutes) of per server/per annum downtime, delivering up to 24x better reliability than the least efficient competing hardware.

The reliability of the Power Systems platform translates into substantial cost savings. As Figure 1, illustrates, IBM Power Systems users accrued the lowest monetary costs due to inherent server flaws of any platform: $2,917 versus $81,683 for unbranded “white box servers,” which experienced 49 minutes of per server/per annum downtime. 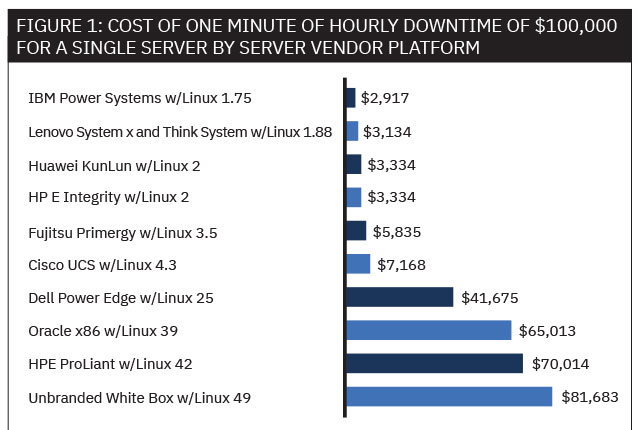 Other top survey findings include:

No Tolerance for Downtime 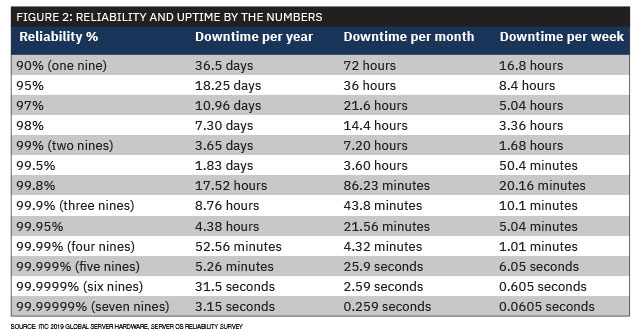 In 2019, four and five nines—99.99% and 99.999%, respectively—are the new gold standards of reliability. Downtime has a domino effect: Outages immediately impact the entire network. When servers fail and applications, data and services are unavailable, productivity halts and business ceases, costing thousands or even millions of dollars per minute if it occurs at a critical or peak usage time.

“IBM shops realize that it makes more sense both from an economic and business standpoint to invest in robust, reliable servers with advanced functionality that offer the best uptime and scalability, than to shave a few dollars off list price.”

The recipe for the Power Systems platform’s superior reliability and availability is deceptively simple and straightforward.

“IBM mapped out a cogent and consistent set of strategies for its Power Systems server portfolio and they’ve successfully executed against it,” says Andrew Baker, president of Brainwave Consulting, a technology consulting firm in Gassaway, West Virginia.

That includes regular, planned product releases; an emphasis on innovation such as the ability to support more compute-intensive workloads like analytics, Internet of Things (IoT) and virtualization; and advanced functionality to support emerging technologies like artificial intelligence (AI), blockchain and virtual reality.

IBM’s technical support has been a bastion of stability. ITIC anecdotal client interviews found that IT managers were pleased with both the quality and speed with which IBM technical support responded to issues.

“IBM Power Systems work; they just work. I can’t remember the last time we had a server crash due to system flaws, hard disk or memory issues. In the financial services industry, bullet-proof reliability is a necessity. Power Systems are robust and economical,” says an IT manager at a large New York bank. “We rarely have to call IBM, tech support, but when we do, they’re extremely helpful and responsive.”

An IT architect at a large technology services provider says, “IBM Power Systems running the AIX* OS and PowerVM* deliver excellent performance, advanced features and high reliability. These are critical for our business.” The Delhi, India, firm has more than 300 servers in its data center. “IBM Power Systems servers are leading edge. We want IBM to continue to deliver advanced capabilities, high reliability and security, so it retains its No. 1 spot as the server technology leader,” the IT architect adds.

Finally, Baker notes Power Systems shops are less price sensitive than organizations that deploy inexpensive, commodity servers. “IBM clients aren’t penny-wise and pound foolish,” Baker says. “They want good deals, but they won’t cut corners and sacrifice quality to get a lower list price. IBM shops realize that it makes more sense both from an economic and business standpoint to invest in robust, reliable servers with advanced functionality that offer the best uptime and scalability, than to shave a few dollars off list price.”

Another plus: The majority of IBM clients adhere to a regular three-year upgrade cycle and retrofit their Power Systems hardware as needed. This is crucial because complex AI, analytics, IoT and virtual reality applications are larger and more compute-intensive.

IBM Power Systems servers have consistently delivered and maintained the highest levels of uptime availability based on every metric and measure of reliability since ITIC’s first reliability poll in 2008. And they continue to do so today.

And 88% of IBM Power Systems enterprises running Red Hat Enterprise Linux, SUSE Linux or the Ubuntu open-source distribution experience fewer than one unplanned outage per server/per year due to bugs or flaws in the OS.

Organizations have every right to expect server vendors to continually improve hardware reliability and deliver a minimum of 99.99% uptime. Vendors must also quickly address and resolve technical issues and security flaws when they arise to deliver advanced features/functions, and provide the necessary guidance and top support.

Organizations’ ability to achieve 99.99-99.9999% uptime is a two-way street, not a one-way foot path. Enterprises bear the responsibility of selecting specific servers in the configuration that best serves their particular business and budgetary needs. They must also employ skilled IT and security administrators who can properly provision, upgrade and maintain a high degree of daily operational efficiency.

To optimize uptime and reliability, ITIC advises organizations to:

To learn more from the ISV community go here.

Every high availability (HA) environment is unique. We all have different applications with different requirements. But whether you’re testing a role swap or dealing with a disaster, it’s never wise to rely on manual processes.

Instead, plan for—and practice—an automated process from the beginning. This way, your role swaps are more likely to succeed, no matter whether you’re using PowerHA* high availability or logical replication.

Here’s what I recommend:

If you have staff executing more than two or three manual processes during a role swap, they’re adding minutes or hours to the swap, while you watch your recovery time objective sail on by.

Tom heads up the worldwide presales team at HelpSystems and is a four-year IBM Champion for Power Systems.