Host Paul Tuohy interviews IBMer Therese Eaton on her role with the CEAC and helping clients. 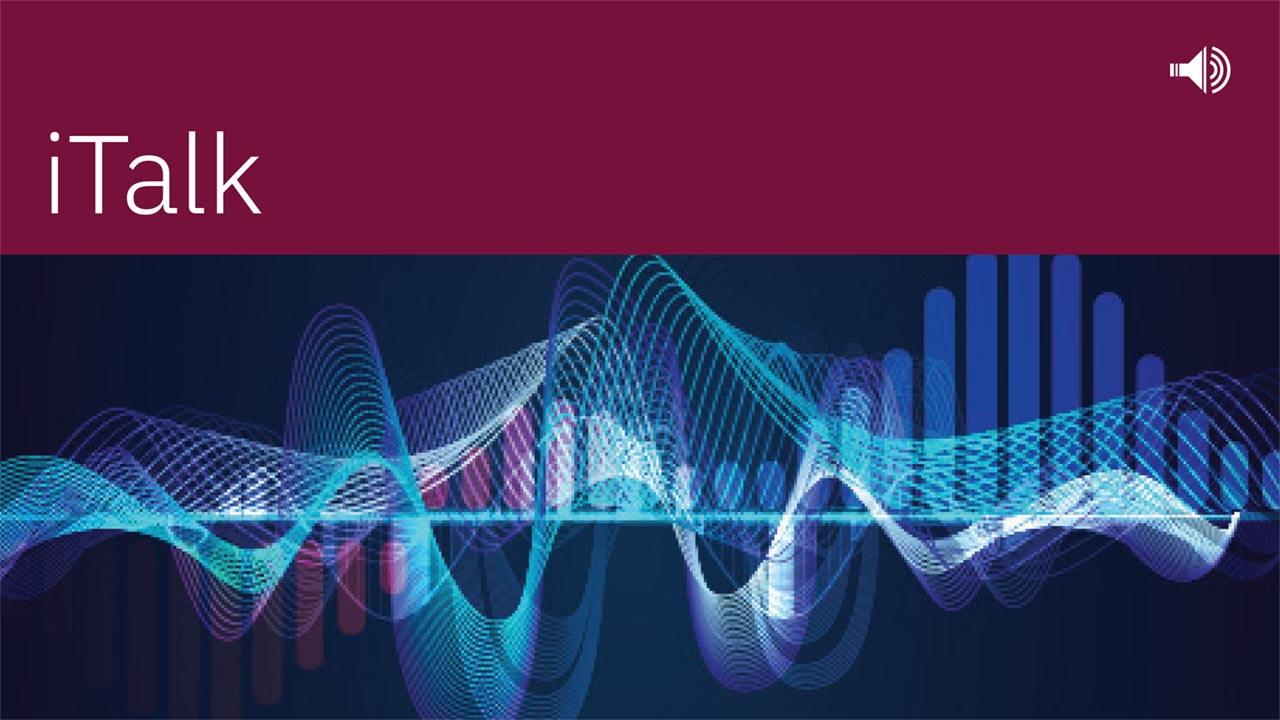 Paul Tuohy: Hi everybody and welcome to another iTalk with Tuohy. I'm delighted to welcome today a lady that I've had the pleasure of working with on and off over the last year, Therese Eaton from IBM in the U.K. Hello, Therese.

Therese Eaton: Hi Paul, how are you doing?

Paul: I'm doing well, thank you. I hope you're doing well as well.

Therese: Yes. Space is coming up so I'm looking forward to another break.

Paul: Okay [laughs]. Aren't we all? Okay Therese, just to—maybe just to start off, do you maybe just explain to people what it is a presales technical architect with IBM in the U.K. does?

Therese: So I work with a variety of clients. I work mainly with U.K. IBM enterprise companies and to understand the industry business challenges and come up with solutions together. My main focus is around Power Systems. My specialty and background is IBM i with that.

Paul: Okay so you're kind of a—is more then on the hardware side or the software side that you help them out on?

Therese: Well now I'm more of a hardware girl than a software girl, but honestly with IBM i you're becoming more and more software than hardware itself. So if I compare to the other operating systems like AIX and stuff and Linux, with the IBM i, we have the integrated solutions for many products that you need to understand and compare to the other two where they are working a lot with IBM Software Group to get that integration, for example.

Paul: Yeah. Yeah, it's one of the joys of having everything all together.

Therese: Yes, yes. It's great but it can also be a bit of a curse to keep anything as a presales to know a little bit about everything. So I know a bit about everything and then I would probably go to someone like IBM Lab Services to get the deep knowledge into certain implementations.

Paul: Right. Okay so if this isn't too—tooimpertinent a question: How long have you been working with IBM, Therese?

Therese: With IBM or IBM i?

Therese: Well basically it's the same answer, I suppose. I'm coming up to 19 years, so it's been a long time. So I think I started when it was iSeries.

Therese: That's some time ago, yes.

Paul: You're a newbie on this.

Therese: Yes, I still understand I'm still the baby in many cases, so—but it's been a tremendous change since I started. It's been quite unbelievable in the last couple of years, you know, in the general technical industry and things have just been sped up with knowledge and adaptation on various technologies. It's quite exciting.

Paul: Hmmm. Okay, so Therese let's talk a little bit about where our paths have crossed because it sure as hell hasn't been on presales stuff that we've met—which is the COMMON European Advisory Council, the CEAC, and you took over last year as the program manager for that. So do you want to talk about that a little bit?

Therese: Yes, sure. So the COMMON advisory group—so it's a technical advisory group helping IBM to really see where they are going to spend development money, and I stepped in and took over when Dawn May, who had done a great job, decided to move on to do other things with great success. And so I put my name in the hat and I was selected to start running the CEAC group. So that is how I sort of entered into that side of things as part of the business.

Paul: Okay, so yeah—and I must say we were quite a group because Dawn had the unenviable task that she was actually the program manager for, I think, all of the advisory groups, and you just get to concentrate on us.

Therese: Yes. Yes. So Dawn has done a tremendous job with all our customer groups. She was running the Large User Group, she was running the COMMON Americas group and the Europe group. Then we sort of split it up between us. How she managed to do all at the same time, I take my hat off to her. So yeah—so I took that on I think it was March of last year and we met a couple of times Paul, haven't we—

Therese: Over that time?

Therese: And had a fair few good discussions.

Paul:Yup. So how have you found it?

Therese: I found it really interesting from several points of view. I find it quite humbling that clients and business partners or people who are involved in the IBM i world give up the time to help to improve the product. It's not just once in awhile. They are really committed to it. And also that from an IBM i point of view it gives us so much wealth of information and knowledge that we might not have gotten otherwise. On the personal view point, it's—I learn a lot from you guys as well so it's nice to work with people on top of the game. What we cover in these groups is everything. So it's all the middleware, really, and a bit of hardware as well. So I'm learning from you guys as well.

Paul: But yet you have to admit at times it is a bit like trying to herd cats, isn't it?

Therese: Yes [laughs] but I quite like doing it so—

Therese: Yes. You know I quite like a bit of structure and just keeping people on the right track to meet the goals that we set to do, so yes. I quite laughed when you said if there was a job for you for cats—for herding cats it would be one for you, and I think I might take it [laughs].

Paul: Yeah well it's been—I've got to say, Therese, I mean we've said it to you before. I mean you are doing an excellent job of keeping us in line because—and we are people who like to talk a lot, so.

Therese:Yeah well it's—leading any sort of group, you need to understand the dynamics of it as well. Who's the talkers, who's the ones that are quiet, and try to give everyone the opportunity to feel comfortable, to get input. So working on that as well with the group, so—and I also hope we have a bit of fun.

Paul: Oh yeah. Oh, definitely. Okay so the third thing that I want to talk to you about, Therese, is the—because actually I had come across your name a bit before we had met—nothing to do with CEAC. This is the pick and mix newsletter. So want to talk a bit about that?

Therese: Sure. So imagine I've been 19 years with IBM and IBM i, and when I moved over to become presales client facing, I was—quite often clients would say to me "there's nothing going on with IBM i. Nothing is happening or anything." And I picked that as a bit of a challenge. So I thought, "I'm going to show you." There is a lot of going on, but not necessarily—everything was—you know with all the turmoil we have today, so even more as we move forward but when I started, you know, it was the way, it was the blogs and articles and I just tried to put it all together. It started really to be focused on clients first, and it was my own client set: to keep them informed of what's going on. The challenge is always to keep people informed—and this drip feeding information. But of course this is not an IBM official marketing letter or anything like that, so it's my own thing that I put together. So it really was covert operations with IBM to get the information out to clients. That's the way I started it.

Paul: So putting words in your mouth here: You were doing this in spite of IBM [laughs].

Therese: I possibly couldn't comment on that. Then it sort of—I then thought it might be good for IBMers to know and then partners to be in the know as well. So it's just developed from my own client set many, many years ago now to, well, several hundred people that are directly subscribing to me and then get it passed on as information, so it's great. It's officially acknowledged by our worldwide marketing product management as an aid to the business. So it's moved on a bit from covert operations but it's still my list and that sort of thing, so it's not an IBM-owned distribution list.

Paul: Okay so the idea behind it then was just—I mean do you doing in on a regular basis like is it every month, or just when you feel there is enough information to send out?

Therese: My aim is to do it every month. It doesn't come out—if it doesn't come out every month, it's because my attention has been taken to do my day job of supporting clients in IBM and also a bit of CEAC. So if you don't hear or don't see anything for awhile, you might be able to find—I might post something on LinkedIn or Twitter, but it would just short snippets. So that's normally why you might not see something every month.

Paul: Okay and can just anybody sign up for the newsletter?

Therese: Yes of course. They just need to drop me an email—so it's therese.eaton@uk.ibm.com—and I will add them to the appropriate distribution list.

Paul: Cool. Excellent because it is invaluable and I mean I've lost count of the number of times I've come across stuff in that list that I just didn't know had happened, or something that had been announced or something had been withdrawn or whatever, and that's where I found out about it.

Therese: Yeah. There's a lot going on isn't there?

Therese: The world of Power and IBM i—

Paul: Well you keep doing that list, please. Don't stop. So—so lastly Therese then just to wrap up, I always like to finish up asking something-people about what they like to do when they're—when they're not talking to CEAC, not doing presales technical advice and not issuing their newsletter.  What do you do in—inyour what—your five minutes spare time every week?

Therese: So in my spare minutes I have a dog and I think dogs are amazing creatures. So we do a lot of walks. So I get a lot of fresh air and exercise so apart from that it also helps with the things that I'm doing at IBM, so it is a stress relief and all that sort of thing. I'm meeting other good people out there but yeah, that's something I love doing is going out for a good walk with my dog.

Paul: And what kind of dog is it?

Therese: I have an English springer spaniel. So it's a hunting dog so you do a lot of walking [laughs] when you have one of that type of breed, so. But he's getting a bit older now, so we're down to two walks a day now.

Paul: And of course spaniels, they're one of those really nice intelligent breed of dogs, aren't they?

Therese: Yes, sometimes too intelligent for the owner, I think. I think the best description for my particular breed was a turbo-charged golden retriever and I think that's quite apt, actually. They're a very nice breed—

Therese: But they can be very busy.

Paul: Okay. I think that's a good note to leave it on is a turbo-charged retriever. Okay Therese, thanks for taking the time to talk to me.

Paul: Okay everybody, that's it for this iTalk. Tune in again for the next one. Bye for now.