May Trucking Modernizes its Application; Server

May Trucking Company modernizes its operations by upgrading to a POWER9 server and overhauling its primary business application. 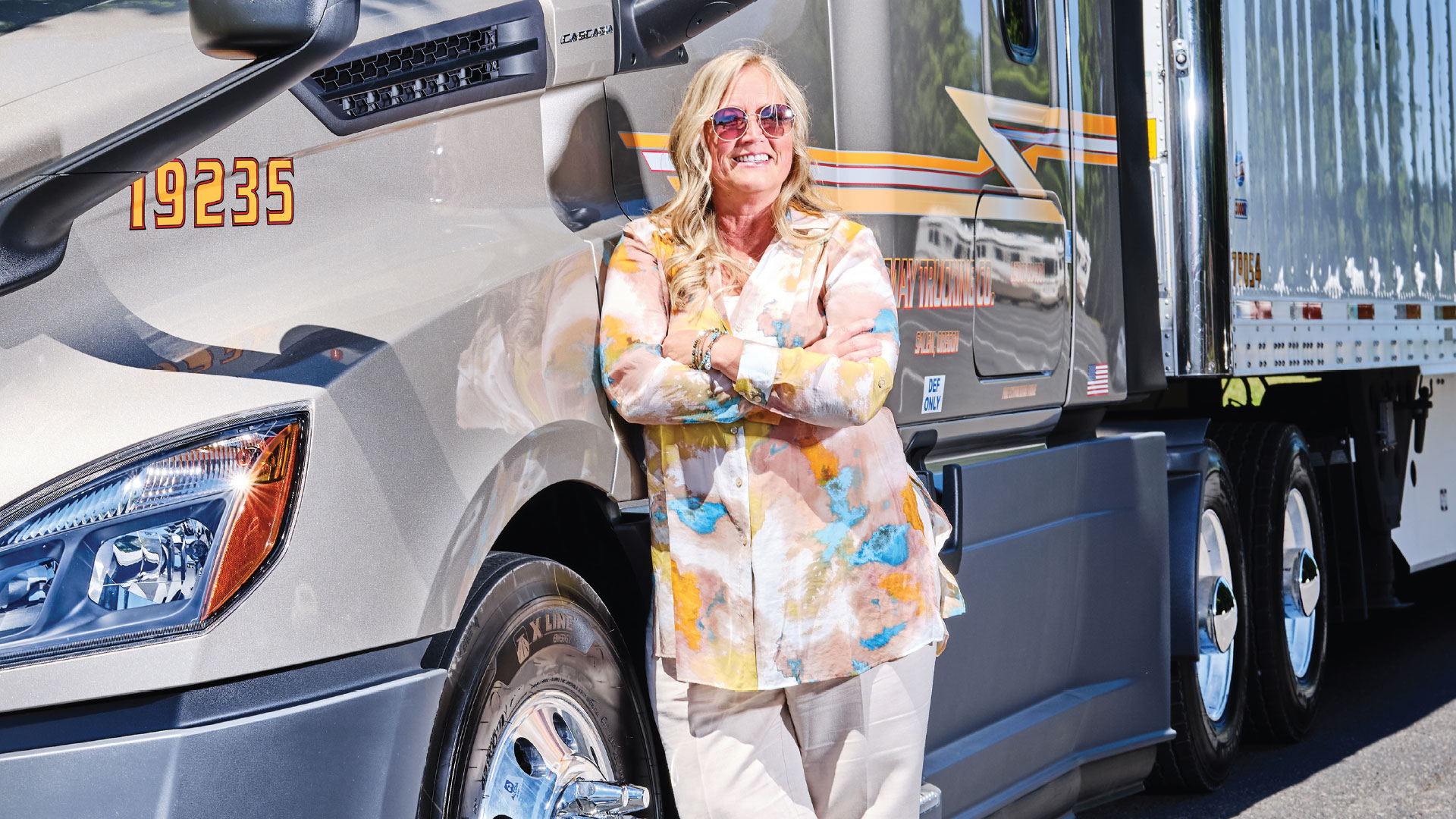 SOLUTION: Using several modernization tools from Profound Logic and leveraging the expertise of iTech Solutions and Group 33 Consulting to test and install a new server

There comes a point when you have to throw in the towel and say, “You know, the system we have works fine, but we need to modernize for efficiency and the improvement of processes to meet our future needs.”

It’s not an easy decision in some cases, but it’s one that’s often necessary. For example, a system that’s out of support can cost more than a new one over time; application demands can tax CPU resources and limit company growth; and productivity can be stifled, resulting in lost business. Those are several of the reasons May Trucking Company decided to upgrade its older system and procure a newer IBM
Power Systems* server.

“We tend to run things into the ground, because if it’s not broken, why fix it?” says Becki Wagoner, May Trucking Company’s vice president of strategic innovation and technology. “But we had reached a point where we knew we had to modernize our core application and operating environment—and we knew our previous system simply wasn’t going to support that.”

With that reality in mind, May Trucking Company began looking for business partners that could help it achieve its current and future goals. After a significant amount of time and in-depth research, these included iTech Solutions, Group 33 Consulting, E-Commerce Solutions and Profound Logic. All were focused on helping the company improve its aging IT infrastructure and core logistics application.

“Our previous system used to consume 90%-plus CPU, but now, after moving to our current POWER8* system, we’re looking at 20%,” Wagoner remarks. “That in itself has resulted in huge operational shifts. People are much more productive, our newly modernized Transportation Management System (TMS) is easier to use and we even made the move to true high availability. Overall, it’s been a tremendous success.”

Headquartered in Salem, Oregon, May Trucking Company is one of the largest transportation companies in the contiguous U.S. It has more than 1,000 trucks, and terminal locations in Idaho, Oregon, Utah, Florida, Colorado, Indiana, Arizona, Tennessee and Nebraska, giving it a true sea-to-sea presence.

This wide reach enables the family-owned business to provide its customers with a comprehensive transportation system that helps them manage the end-to-end flow of their products. Supporting this is an EDI infrastructure that allows the company and its customers to quickly communicate with one another.

As Wagoner explains, “In the case of one client, 90% to 98% of our load-traffic communication is done through EDI. They’ll send us information about their loads and a customer service rep will determine if loads are either accepted or rejected. This is based on factors such as timelines and equipment availability. Once a decision is made, we’ll reply in another EDI transmission.”

May Trucking Company’s TMS application is, of course, another key to making sure its trucks go out on time to satisfy customer needs. It’s used internally to track EDI-generated service requests, from initial contact to shipping fulfillment. It also helps users track trucks and determine whether trucks need fuel refills.

Unfortunately, the TMS, purchased in 1993 and heavily modified over the years, was showing its age. The interface was green screen—something new hires had to adjust to—and required more effort to complete even simple tasks, such as the aforementioned truck fueling. As Wagoner puts it, “If you wanted to fuel your truck, you’d have to go through three screens to do so.”

Even more critical was the amount of time it might take for a customer service representative to respond to EDI 204 Motor Carrier Load Tenders. If May Trucking Company didn’t get back to a customer within a specified amount of time, that business would be lost to competitors. The company’s then-green screen interface and RPG-based TMS application certainly didn’t help in this regard, although the service representatives did everything they could to meet response deadlines.

The company considered purchasing a new TMS application to replace its existing system. While some great ones are available, it made more sense to evolve its current system. “One of the reasons we still have it is because we’ve done so much customization that there’s no other TMS out there that could replace it and do what we do today,” she says.

With a packaged solution off the table, the decision was made to modernize its existing system. To that end, May Trucking Company looked at several application-modernization vendors to determine which might have the tool it needed to quickly and efficiently help it upgrade the TMS.

“We went through this before—but it wasn’t pretty. In fact, there was an employee  who stood up in the middle of the floor and said, ‘Hey guys, I’m going for doughnuts. I’ll be back.’ He never did come back,” Wagoner recalls. “So, our president had T-shirts made that had a do-not-enter sign over a doughnut. Those of us that lived through that and are still with the company had some history and perspective on what it really takes to make this type of large-scale modernization effort.”

Upgrading the OS and Server

May Trucking Company decided that Profound Logic was the type of partner it was looking for—and not only for its modernization tools, but also the expertise and assistance needed when transitioning from green-screen applications to GUI software with enhanced back-end functionality. But there was a roadblock in the way.

Because Profound Logic no longer supports IBM i 5.4, the version May Trucking Company was using, the company needed a new server to run a current version of the OS.

Additionally, the Power Systems 520 was running at or near capacity—consistently above 90%. This resulted in not only slower processing, but also the inability to replicate the system to a backup box. Instead, the company was only backing up to tape on a daily and quarterly basis, which meant it didn’t have true high availability.

Realizing it had to replace the 520, May Trucking Company reached out in 2018 to iTech Solutions to find an appropriately sized box. That ended up being a Power Systems S814. But before simply plugging it in and transferring every application and other resources, May Trucking Company and iTech took some vitally important precautions.

“Because we were on 5.4, we needed to make sure all of our software would still function properly when we upgraded to 7.2,” Wagoner recalls. “So, iTech spun up a virtual partition on a box they were hosting and I sent a tape of my full backup to load. We ran testing on everything running under 7.2 for almost two months. We had every department test to ensure there weren’t any major hiccups. With everything working as expected, we finalized our decision to move to 7.2.”

This is the third box upgrade I've been involved in, and this one was the smoothest. ... I'm very grateful for the help we received.

With that out of the way, May Trucking Company had iTech Solutions onsite for the S814 installation and migration, setting up the new machine, tape drive and console. iTech also brought in an IBM LTO-3 SCSI tape drive to attach to May Trucking’s old machine for compatibility with its new tape drive attached to the POWER8.

The actual migration from the hosted partition to the 820 didn’t take very long, as Wagoner notes. “Conducting testing to identify any issues was the best thing we could have done before going live on the new box. In the end, we had zero issues—aside from our EDI package, which we had already replaced with a 7.2-compatible solution from E-Commerce Solutions—and we’ve had zero issues since,” she says. “How long did it take? Well, Friday night, we were running on the old machine. We shut that down to back it up. We moved the tape to the new machine, iTech did the restore to the new POWER8, and by Saturday morning, we were running on the new machine.”

Thanks to this move, CPU capacity has dropped from more than 90% on the 520 to 20% or so on the S814. This then allowed the company to begin the live replication of the S814 in near-real time to an iTech-hosted

Power Systems S822. Its virtual backup tapes are also backed up to an iTech-supported cloud environment. Now, if something were to happen to the S814, May Trucking Company’s country-wide network of access terminals would begin operating against the replicated production environment.

Additionally, May Trucking had been conducting full nightly backups prior to the completion of the migration, taking the system down for an hour and a half each day. It’s now using a hosted virtual tape library that replicates to a local virtual tape library at headquarters, saving the company over 500 hours of downtime a year.

Taking TMS Users to the Next Level

After the 520 had been upgraded to the S814 and IBM i from 5.4 to 7.2, the Profound Logic tools were now fully functional, giving the TMS application modernization effort renewed urgency. This included not just the interface, but also low-level application improvements, such as the integration of Node.js.

“When we looked at evolving, it wasn’t a matter of just having a faster machine. Sure, it performs better, but it doesn’t make your job any faster,” Wagoner says. “So, part of the Profound integration was to take the users to the next level and give them easier access to resources to improve their productivity. This applies even to the truck fueling, where you’d have to go through three screens to fill your tank. Now, you can click on a single button and away you go.”

The same also applies to EDI Motor Carrier Load Tender responses. Since having upgraded its TMS and EDI solution, customer representatives can more quickly decide to accept or reject a service request. And if they decide to accept it, they can indicate that well within the customer-specified time period—and not lose loads to competitors because of delayed responses.

It’s sometimes difficult to give up on a proven solution until circumstances demand it. In the long run, though, as in the case of May Trucking Company, it becomes not only necessary, but desirable. May Trucking Company, for example, now has a faster Power Systems server and a more robust TMS application.

Despite this, Wagoner hasn’t completely cut ties with the past. As she jokingly puts it, “The old box is still sitting there. I can still access it. And I’m thinking about making a coffee table out of it. It’ll be an antique someday, you know?”

That coffee table wish aside, both Wagoner and May Trucking Company are delighted to have moved into a more modern computing environment. Processes run faster, productivity has improved, and the availability of near-real time backup and disaster recovery has given the company peace of mind.

Having the support of partners such as iTech and Group 33 also doesn’t hurt. “This is the third box upgrade I’ve been involved in, and this one was the smoothest. With the other upgrades, we brought the boxes in and did our own testing, but that seemed to take a lot longer than this time. I’m very grateful for the help we received,” Wagoner says.