The Shift to Virtual Training

Jim Buck and Michelle Lyons of imPower Technologies, LLC, and Jon Paris and Susan Gantner of Partner400 discuss the new virtual climate and what they expect for the future of professional training. 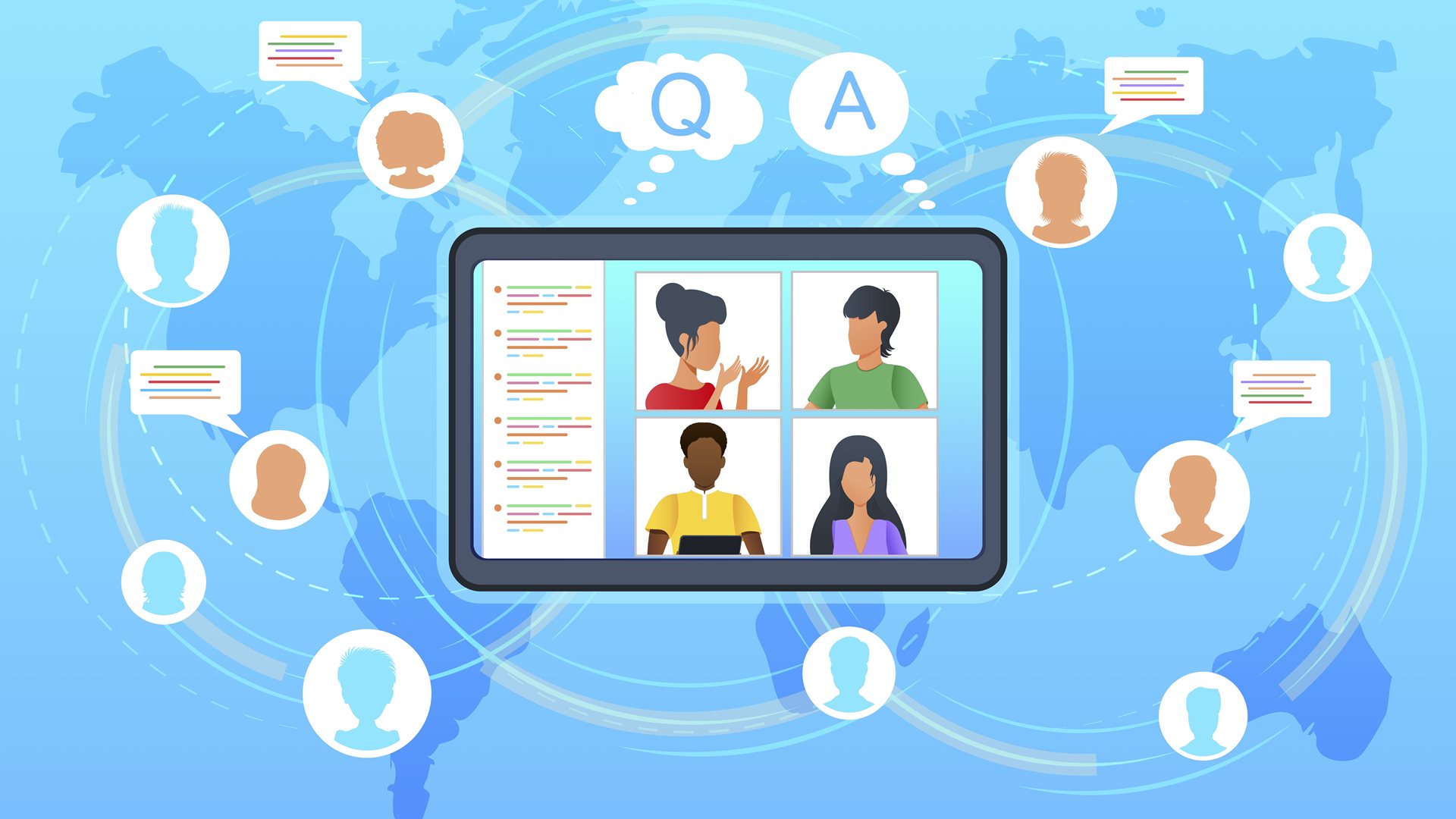 The COVID-19 pandemic changed the face of how we interact with one another, prompting a switch to virtual strategies regarding event planning, community connectivity, training methodologies and more. To help you understand and navigate these changes, TechChannel sat down with Jim Buck and Michelle Lyons of imPower Technologies, LLC, and Jon Paris and Susan Gantner of Partner400, to discuss the highs and the lows of the new virtual climate and what to expect for the future of professional training.

TechChannel: How have you seen training strategies shift in this new digital climate? What strategies are you using to teach?

Jim Buck (JB): The big thing I think happened with the online training is that it leveled the playing field for enterprise and small business. If you're going to train 20 developers, the cost per developer is less than if you have three. It doesn't make any difference if you're a small shop or a shop with 20 people.

Michelle Lyons (ML): Another advantage is that they don’t have to start the course or work on it at the same time, so you don't have the issue of tying up your whole department at once.

JB: As far as strategies go, every Wednesday we have a three-hour WebEx where students can ask questions. We often have students drop in when they can’t get something to work or to show off cool projects to all the other students, so I think that's pretty unique. Sometimes they’ll have a program they can't get to compile or to work properly and that's the “Jim Show” part. I fix while they watch; usually I can pull the rabbit out of the hat. Sometimes the hair is a little mussed up when I finally get it out, but it's fun.

ML: We've also got help tickets they can fill out if they get stuck at any time and we will respond to them within 24 hours so there's lots of support.

Jon Paris (JP): We work with the client to establish where there are gaps in current programmer skillsets, then we try to educate into those gaps. Unfortunately, that often means we don't have a continuum of the exercises that makes it easy to track what students are doing so it's really difficult to be sure when they're following and when they're not.

Susan Gantner (SG): In the in-person classes, we gave them the option of working on our system, or they could work on their own system. With virtual, we require people to work on our system because that's the only way we can check to  make sure that students are doing the hands-on exercises. Or if people are completely lost, or when it's time to move onto the next thing.

TechChannel: Jim and Michelle, imPower Technologies has been leveraging a virtual training strategy even before the pandemic. What led you to go that direction, and what’s worked well?

JB: I was really successful in a college environment, but there were certain things I wanted to change. I left teaching in a typical college environment about four years ago, and my goal was always to do online training. I had 15 years’ worth of class materials, several textbooks and teaching experience—and I decided to leverage my knowledge of training along with online presentation to create a virtual training model. That's basically how that all came about. And in the midst of this pandemic, it’s become clear that I made the right choice.

ML: In this virtual model, we’ve noticed an increase in accountability. Before, students would turn something in and expect a high grade just for completion. We don’t have that issue with what we’re doing now. These are employees now that have been hired and they need to learn this so it's not the same as in the college. It’s not just education—it’s training for your job.

JB: They're a lot more vetted in this model, too. I would also add that another key benefit of virtual learning is that those who struggle with retaining information can watch our training videos multiple times, which can help them fully understand the material they’re learning.

TechChannel: What parts of shifting to virtual models (for either training, or events) have been the most difficult? What new challenges have risen out of the new virtual climate?

SG: Regarding virtual training, Jon and I had spent our entire careers more or less fighting tooth and nail to not do online training. We did not want to do it because we felt strongly that our forte was certainly face-to-face training. I always had the same materials as guidance, but I would never teach a session the same way twice. Different things would occur to me while I was talking or, because of discussions that we'd had in class, I knew certain things would resonate more with these students, or I'd just look at their face and think, “Oh, they're not getting this. I better take another tack on this.” All of those kinds of things just don't lend themselves very well to a virtual environment. We run conferences twice a year, and that was probably the biggest simple impact to us in the pandemic. We had a conference that we ran for programmers twice a year, and we had one scheduled for Dallas in March, which didn't happen.

JP: And when it comes to class materials, handouts and lab instructions, we know that when they're sitting at a computer, viewing in a PDF is not optimal. With our in-person classes, we always give them printed materials, but of course when we're delivering electronically, we can't do that. We have to rely on them printing. Many students don't have a printer at home and so they cannot print materials. Often, they haven't even got a second screen at home … we've tried suggesting to clients that they encourage people to print materials and/or send out copies of the lab script, but nobody has done it yet.

SG: It depends on the client, as well.

ML: We didn’t make a shift to virtual training, but we did have to shift to virtual events. We’ve noticed that whenever you try to have a conversation on video platforms, the software just can't cope with multiple people speaking at the same time. It's a very different thing when you can meet and discuss options around the table … the technology isn't yet ready to replace that table because if I start talking when you're talking, you get cut out.

JB: In-person conferences are really important because you get to find out what other people are doing, what people have tried and what didn't work or did work. I was in a couple of those for COMMON. Barbara Morris and I were in a virtual open panel for two hours and we had like three people show up. Talking to a lot of the other speakers, it was the same kind of thing. People just don't seem to attend online panels unless they have a specific question. At in-person events, people would sit and talk, and that's really something that's missing. I don't know that we'll ever really get that back virtually.

TechChannel: If you had to offer once piece of advice to someone new to navigating the new virtual training landscape, what would it be?

JB: I think the biggest thing is companies have to figure out they shouldn't do the training themselves … Companies need to focus on employees learning their business, because companies hire programmers that know five or 10 different modern languages, but they don't know what a purchase order is. They're technologists. They really need to focus on the business and let us focus on making them a good IBM i developer.

SG: I’m a big believer in that as well. In particular, we do a lot of RDi training. I find a lot that people think they can teach themselves RDi, and some undoubtedly can, I suspect, because it's supposed to be easy to use. Isn't that the whole point of RDi—that it’s so easy to use and so powerful? I mean, you can learn to get things done on your own, but after paying the money for RDi, wouldn't you want to actually take advantage of all the features that are there - not just the ones that are obvious?

ML: We suggest that new employees complete our training, and learn your business. It's changing the thinking from “I've got to find an RPG programmer,” to, “I've got to find a programmer then turn them into a RPG programmer,” because people are always looking for the unicorn when they're hiring. Young developers don't have the 20 years of experience on the system, but they know the web. They know all this stuff, that if you just go find a run of the mill RPG programmer, they're not going to know, and you may want them to learn all those things. It's easier to take someone that has all this other knowledge of the modern stuff and teach them RPG.

TechChannel: What parts of online training have surprised you?

SG: I was a little surprised that most of the students in our private corporate classes have been pretty open to sharing their screens not just with us, but with the rest of the class, which is something that surprised me because I thought they might not want to show their co-workers that they were having difficulty.

JP: Also, when it comes to our conference business, we've now got a whole bunch of competition we didn't have before.

SG: I think part of it, as Jon says, is just because there's so much out there and it's all virtual so it doesn't matter where you are. You now have access to, say, 20 conferences and other events in 2020. There are companies starting to do some online learning, as well, because it suits their mission to show people what they know about systems management. There’s just so much out there, an awful lot of it for free, or if not free, then very inexpensive compared to ours because we pay our speakers and all of that.

JP: I suppose another surprise for me, anyway, is the attitude of management. When companies paid to have you come on-site to teach a class to 20-25 people and there were maybe four or five who have come in from out of town—and were being put up in a hotel by the company—management seemed to do more to make sure that the people weren't being pulled away from the class to do regular work.

SG: Yeah. With the virtual classes, people get pulled off even more than usual because they have to go do something else. That’s always a bit of a challenge.

JB: We’ve found that accountability is something that’s been missing in professional training.

TechChannel: How can companies increase accountability in training?

SG: Trying to get the students motivated one way or another quite often happens through management because management needs to say, “This is important. You need to do this.”

JB: Introducing accountability to management creates a response both from the employer and the employee because the employee can start going to the boss and show their progress. One thing that we ended up doing was sending out bimonthly progress reports. The employer gets to look to see where his money is going. It was surprising the amount of effort that some of these employees started putting in when this began. You could actually see their assignments coming in before the due dates.
Tagged as: