Mainframe Executives From Across the Industry on Diversity, Inclusion and Equity

Highlights from the “Making Our Strong Community, Stronger” webinar on how to invest in diversity and inclusion 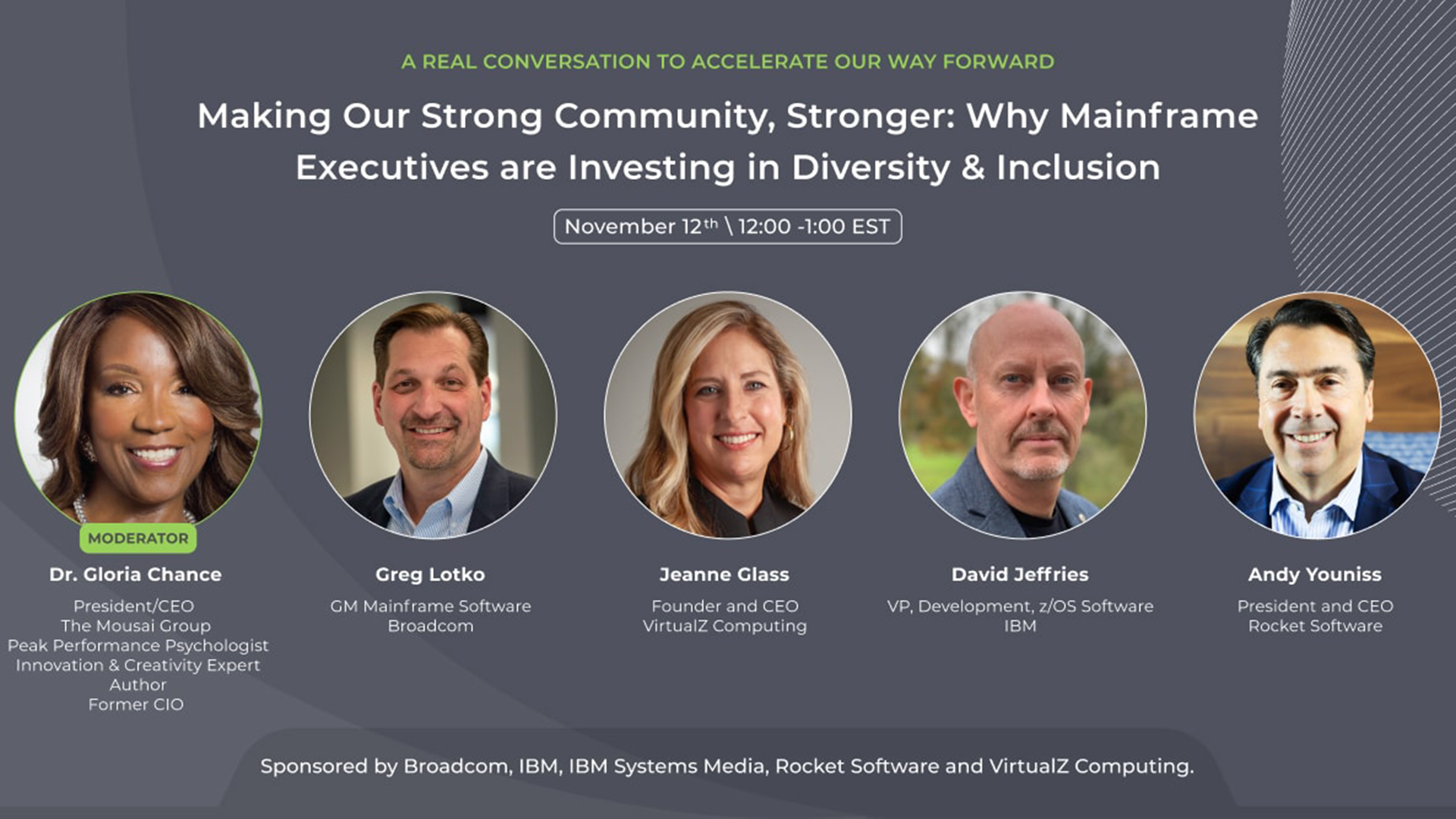 On November 12, 2020, Broadcom, IBM, Rocket Software, VirtualZ Computing and IBM Systems Media sponsored “Making Our Strong Community, Stronger,” a webinar on diversity, inclusion and equity that posed the question to mainframe leaders: “What are you doing about it?”

Dr. Gloria Chance moderated the event, discussing current diversity efforts at the four companies, why accelerating inclusion is a priority and what is needed to create more inclusive tech environments. Panelists included Jeanne Glass of VirtualZ Computing, David Jeffries of IBM, Greg Lotko of Broadcom and Andy Youniss of Rocket Software. We listened in and captured some highlights from this influential webinar.

“In my success and privilege as a proud and accomplished person, like many individuals who are marginalized for their difference, none of my success or hard work matters when some see the color of my skin or my gender. As a result, there are times when many of us don’t feel safe and oftentimes suffer in silence,” Dr. Chance says. “This treatment might happen consciously, but oftentimes the behavior is unconscious.” Conversations like these are very important to me and for society’s progress.

Dr. Chance started off the panel asking each panelist why diversity and inclusion is specifically important to them, and why they wanted to speak about it today.

“I believe that values are foundational for a person and organization,” says Lotko. “Having those core values provides transparency and clarity for who you are and what you stand for. Now focusing on diversity, our differences, whatever the source, bring different perspectives to a discussion, to a challenge, or to a problem.”

Lotko sees a focus on diversity as part of his responsibility as a leader. During the panel, he discussed Broadcom’s diversity initiatives, including a broad initiative that actively sought out and removed culturally insensitive terminology from the vocabulary used in various products, documentation and operational guides. This “Words Matter” initiative did more than just eliminate insensitive terminology; it proactively fostered appreciation for the company’s diverse cultural environment, as have other division-wide initiatives that reward individuals for living up to Broadcom’s inclusive culture.

Jeffries pointed out the importance of being a global company that does business across countries with many cultures. His awakening to the necessity of diversity and inclusion came from the death of George Floyd; as Jeffries is not American, he initially thought it wasn’t his place to comment. “A quick look in the mirror kind of changed all that,” Jeffries says. “This is absolutely down to me. It’s down to us all, every single one of us. Tackling diversity, equality and inclusion requires action.”

Jeffries discussed IBM’s partnership with historically Black colleges and universities, and the National Society of Black Engineers. IBM is also ramping up their Service Core Reignite Program, which partners with non-profits to provide skills, development and mentorship. IBM continues to see success with P-Tech programs that partner with Black middle and high schools for STEM enrichment programs.

Glass, as the CEO and founder of VirtualZ—the first and only female-owned software company in the mainframe industry—was intentional about diversity when starting a women-owned business. VirtualZ works to drive more diversity in the industry by sponsoring, speaking, advocating and creating community events around DI&E

“We’ve already seen the impact of all of us coming together and the power of our collective voices resonating through this panel,” Glass says.

Youniss began to think about diversity most seriously five years ago, when he thought to himself, who and where is our next generation of Rocketeers?

“I didn’t know what language to use, either privately or publicly. I know as CEO, I’m not supposed to talk about age, and talking about the next generation would make people uncomfortable,” Youniss says. However, he knew that the company had to attract younger generations in order to survive.

“My Rocket story for 30 years has been about global diversity. We built a strong Rocket community in dozens of countries across the globe,” Youniss says. But he realized that he needed to provide more opportunities here in the US to provide opportunity and access to the next generation.

What Companies Are Doing About It

Broadcom’s Vitality Program was created to combat the narrative that it’s difficult to attract talent to the mainframe. Rather than looking for pedigree or technical skills, the program looks for core qualities and aptitude. This dramatically expands the talent pool and increases the odds of finding people who will be the right “fit.” The program is currently 34% women, 59% people of color and 100% have no prior mainframe experience.

Lotko took issue with research completed by the Center for Talent Innovation that states that white men think diversity takes away from the “real work” of a company. Lotko disagrees, saying that everyone, including white men, needs to think about how to create a healthier ecosystem.

“Measurements aren’t the be-all, end-all,” Lotko says. “It’s about actions and making that behavior and the expectations a part of the cultural norm.”

Jeffries discussed the importance of attracting Gen Z workers, who want to work in an environment where they can make a difference. In the Z community, that means embracing a broad set of skills and knowledge to create a lower barrier to entry.

“I want our teams to go and talk to recruitment fairs. I want them to deliver commencement speeches at colleges,” Jeffries says. “I want them to evangelize why the IBM Z platform is a terrific place for them to leverage their skills.”

For Youniss, a culture of inclusivity is important, and Rocket’s annual hackathon, Rocket.Build, is a great opportunity for diverse community members from all over the globe to collaborate.

As the CEO of a new company, Glass wants the diversity of her company to not just impact their business but the community at large. “I believe we need to continue to attract representation from more companies into this conversation and incorporate the work that they’re doing into our voice to broaden awareness and participation in these programs,” Glass says.

Dr. Chance ended the panel by asking the audience what they are doing about diversity and inclusion, no matter what their role or level is, because everyone can contribute. Allyship means listening and thinking critically about injustice.

“Diversity is the art of thinking, thinking independently together,” Dr. Chance says. “Inclusion is having a seat, and a voice at the table. And equity is about being able to have an equal, just part of whatever is being served at the table.”