When high schooler Enzo Damato had the chance to buy a used mainframe for $100 in 2020, his parents weren’t exactly ready to set up an electric substation at their house and give up their garage. But fast-forward to 2022: Damato has gotten his wish—the garage is home to a z114 mainframe.

Damato, who started working on his first server as a fourth grader, says his interest in the mainframe began in eighth grade after listening to Connor Krukosky’s SHARE session, where he described how he was able to get a mainframe of his own. Since then, Damato has tried to learn everything he can about the platform, starting by participating in Master the Mainframe (now known as IBM Z Xplore).

After passing on the initial opportunity to buy his own system, Damato began researching and was determined to get the right machine—and he finally found it on eBay in May 2022.

“I have a rack of normal servers, plus the mainframe, plus some storage technology,” says Damato. “I want a warehouse where I can keep everything without bothering my parents and expand it, but that’s expensive.” The garage will have to suffice for now—and the unexpected benefit? “In the winter, we’re going to redirect the exhaust back inside to heat the house,” Damato notes.

Shortly after acquiring his mainframe, Damato started working to make connections with other mainframers and attended the VM Workshop at Binghamton University. There, he met IBM’s Paul Novak, who has become a trusted resource and mentor. 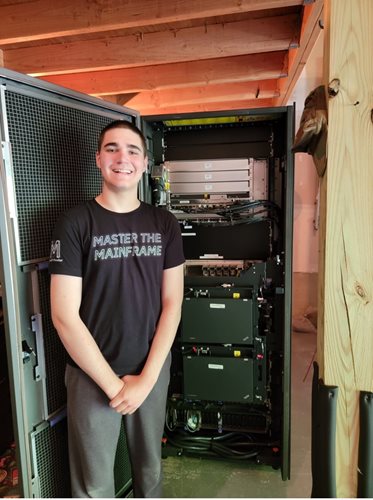 Fig 1. Damato poses with his mainframe.

Aside from attending workshops and seeking mentorship, Damato—a self-proclaimed science geek—is largely self-taught. “I have Asperger’s, and especially with this whole mainframe project, I’ve been working on socializing. But I generally prefer to research things myself before I go to someone else,” he says. His main resources: Google and YouTube. “If it exists in the world, it’s on Google; if someone knows about it, there’s a good chance they’ve made a YouTube video about it.”

Despite the abundance of information on Google, Damato mentions that one of the biggest challenges he faced as a new mainframer was finding resources for beginners. “The resources are there; they’re just impossible to parse,” he says, citing a time he had to manually read the source code for a SAN system on Linux, debug it himself and create a pull request—all to complete a simple, one-line fix.

He’s found that the most helpful resources are community-created articles that get back to the basics—how to create a file, how to make a new folder, how to mount a new disk—rather than assume readers already know certain information. For example: How do you install CICS? “That’s a question no one in the mainframe would ask because most of their system is already set up,” Damato says. “But it’s essential so beginners can get to a point where they understand the more complex stuff.”

Drawing from his own experiences, Damato has been working to address the need for more mainframe resources—especially those tailored to beginners. He created a blog at enterpriselab.dev, where he documents his mainframe journey and open-system projects. According to Damato, these simple articles are massively helpful when it comes to solving small but common challenges.

He also had the opportunity to present at SHARE Columbus, detailing his technical journey from start to finish. “My session went really well,” he says. “I filled my entire room.” Damato was thrilled to hear what others at the conference were doing with the mainframe. He notes, “They were all so friendly … my experience with the whole community has been really positive.” 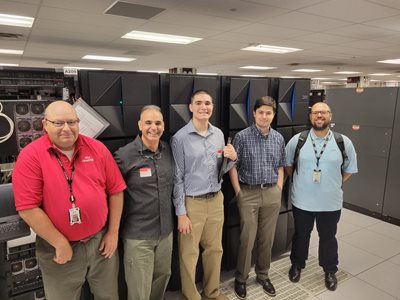 Damato says his next step is college, and after that, “Who knows?” As a high school senior, he’s devoting much of his time and attention to filling out college applications and writing essays. Is a mainframe career part of his future? “I’m definitely keeping my skills current and staying updated with the technology,” he says. “I’d love to do something in the mainframe but saying exactly what I’m going to do and who I’m going to work for in five years is kind of difficult.”

For now, Damato will focus on earning his degree and keeping up with the technology space. As for his mainframe? “I know it’s going to stay online while I’m at school. What building we’re going to be keeping it in is currently an unknown.” While Damato has a lot of unanswered questions, one thing is certain: The future is bright for this young mainframer.

Emma Pitzl is a B2B content specialist at MSPC.