Annual 5 in 5 predictions from IBM Research could revolutionize the global food supply chain. 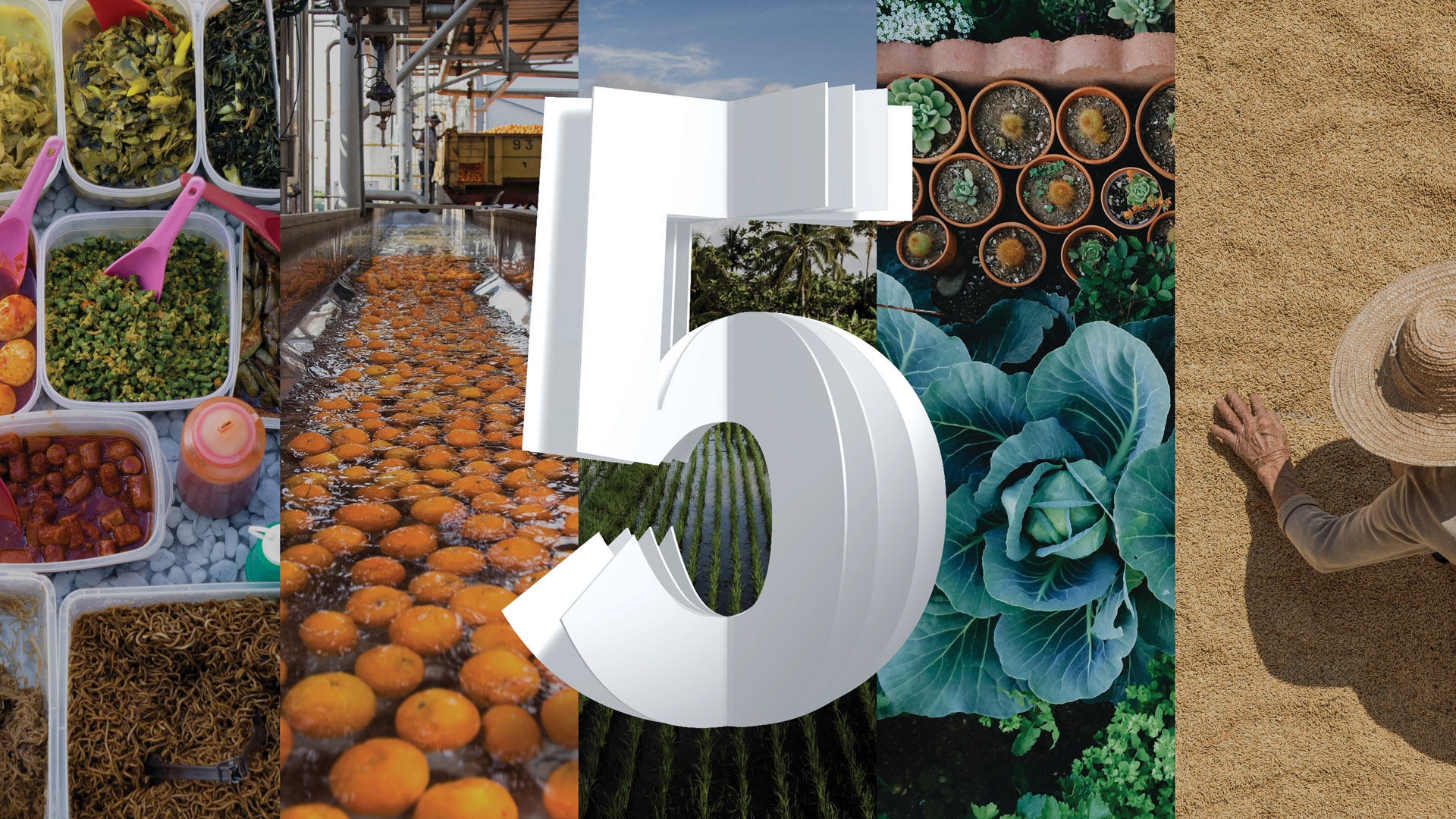 According to the United Nations, the earth’s human population could grow to 8 billion people over the next few years. Go to research.ibm.com/5-in-5/ to read more about IBM Research's five seed to shelf predictions. Unfortunately, the global food chain—from farms to processors to grocers to the table—may not be able to safely and effectively keep up with that increased demand.

IBM researchers are now working toward tackling this pressing issue, however. Their efforts include using artificial intelligence (AI), machine learning, blockchain, sensors, Internet of Things (IoT) devices, massive databases, DNA sequencing and new chemical processes to enable the entire food chain cycle to operate with more predictability and efficiency. And in the end, they’ll also have saved millions of lives and dramatically decreased environmental impacts—not bad for a five-year plan.

It’s hard to believe, but the earth’s population will increase to more than 11 billion by the end of the century, per the U.N. (research.ibm.com/5-in-5/seed/). But to the detriment of everyone, arable land will only continue to decrease. The result: mass food shortages, in part driven by another key factor. Farmable land isn’t used as efficiently as it could be, with half of farmers worldwide suffering annual post-harvest losses due to poor planting practices.

A digital twin, or a “virtual model,” of the world’s farms could lessen post-harvest losses by allowing farmers to share research and anecdotal insight, communicate crop-growth data and connect with the food supply chain. Participants at every level will have access to more information and resources than ever before, resulting in more plentiful and lower-cost food.

Because the creation of replica farmland requires the processing of thousands of terabytes of data, IBM Research is developing the IBM PAIRS Geoscope, a platform designed to collect and parse data based on maps, satellite information, weather resources, drones and IoT devices.

Pulling from data mined through systems such as IBM Watson* Decision Platform for Agriculture, PAIRS allows anyone to research and monitor various factors influencing farms around the world, providing critical data to not only growers, but also sellers, consumers, governments and—critically—those looking to combat world hunger.

2. Decreasing the Amount of Food Spoilage

Because of a convoluted food-distribution system that places little emphasis on reducing food spoilage, 1.3 billion tons of food, or a third of all the food grown in a year, is thrown out, (research.ibm.com/5-in-5/harvest/ ) according to the U.N. The imprecise nature of today’s supply chain (from farmers and shippers to food packers and grocers, and end consumers) unfortunately contributes to this astonishing number.

Many of the costly unknowns in the food supply chain will be eliminated. From farmers to grocery suppliers, each participant in the food ecosystem will know exactly how much to plant, order and ship. Food loss will dramatically diminish and the quality of produce will greatly improve.

To support this goal, the IBM Food Trust blockchain-based secure digital ledger connects every member of the food supply chain with accurate, shared information. This has the potential to remake the entire food ecosystem, as IBM researchers work on combining blockchain with IoT sensors and AI algorithms to make seed-to-plate food tracking more accurate and reliable.

Incredibly, the Centers for Disease Control and Prevention estimates that in the U.S. alone, foodborne diseases cause 48 million illnesses, 128,000 hospitalizations and 3,000 deaths every year (research.ibm.com/5-in-5/shelf/). Recent outbreaks of E. coli have demonstrated how stubbornly resistant the food system is to change. Costly laboratory testing—which often takes up to 48 hours to complete—is a key contributor to that resistance.

The world’s farmers, food processors and grocers—along with billions of home cooks—will be able to effortlessly detect contaminants in their food. Researchers are creating powerful, portable AI sensors that can detect foodborne pathogens anywhere and everywhere they might turn up.

These sensors could dramatically increase the speed of pathogen testing from days to seconds. At home, sensors could be embedded in cutting boards, countertops, and even forks and knives. On the industrial level, they could be become part of conveyor-belt systems at food processing centers.

IBM Research is currently creating bacteria-detecting sensors that would be a next-generation extension of IBM’s Crypto Anchor Verifier. This optical device uses AI and machine learning to analyze microscopic features and “read” the wavelengths of different substances. After scanning a material, a verifier records its unique wavelength and microscopic details on the blockchain, comparing those results to that of other known and identical substances. When alarm bells ring, foodborne bacterial outbreaks could be all but eliminated.

People may not consider microbes when it comes to choosing food, but millions of them coexist within the food supply chain (research.ibm.com/5-in-5/plate/). Those that cause foodborne illnesses annually account for $55.5 billion in the U.S. alone in medical costs, lost productivity and illness-related mortality, according to a 2015 study by Robert Scharff, an associate professor in the Department of Human Sciences at Ohio State University.

Supporting this notion, IBM Research has decided to study the dynamics of microbial communities for use in food safety. Using DNA and RNA sequencing, researchers may soon be able to profile microbiomes everywhere that food production or delivery takes place. These analyses can then be used to detect abnormalities in the microbiome, including sudden and unexpected upticks of pathogenic bacteria or shifts in overall microbiome composition.

By developing a world-class database of microbes and harnessing advances in NGS big data analytics, IBM Research and partnering organizations such as Mars Inc., Bio-Rad and Cornell University, are working to create increasingly effective food-testing regimens that may allow inspectors to identify dangerous pathogens with better sensitivity well before anyone becomes ill, with food safety becoming predictive rather than reactive.

Most manufactured plastic becomes trash in less than a year. By 2050, a study by the World Economic Forum predicts, there will be more plastic than fish in the oceans (research.ibm.com/5-in-5/trash/). Historically, most of this material hasn't been recycled, a primary reason that 8 million metric tons of plastics are estimated to go into the ocean each year, according to the 2015 Science magazine article “Plastic Waste Inputs from Land into the Ocean.”

Plastic recycling advancements like Volatile Catalyst (VolCat) could be adopted around the globe to combat plastic waste. People buying a bottle of soda or a jug of milk will know the plastic that comes with their purchases won’t end up in the ocean, but instead be repurposed and put back on the shelf.

IBM researchers have discovered the VolCat catalytic chemical process that digests certain plastics (called polyesters) into a substance that can be fed directly back into the plastic manufacturing process. The team of researchers behind VolCat imagine the system being used at recycling and polyester manufacturing plants worldwide—eventually giving fish some swimming room.

In the coming years, advancements like VolCat will make plastics recycling more efficient and more versatile. Unlike traditional mechanical recycling techniques, future plastics recycling will break down both colored and clear plastics, as well as both clean and dirty containers—both significant issues within the recycling industry—to produce high-quality final products that are 100% recyclable.