IBM today took a big step to expand its Power10 server enterprise presence with the introduction of scale-out systems designed to modernize, secure and automate business applications and IT operations, particularly in hybrid cloud environments.

A Look at the New Servers

During a pre-briefing call with analysts last week, Steve Sibley, Vice President, IBM Power Product Management said the new servers complement the Power10 E1080 server introduced in September 2021. One of the most beneficial attributes of the Power10 family is the architectural consistency it provides across on-premises datacenters, public, hybrid and private clouds. The Power10 offerings deliver a secure, resilient hybrid cloud experience that can be managed with other x86 and multi-cloud management software across enterprises’ entire IT infrastructure.

The IBM Power10 family is the first commercial IBM processor built with 7-nm processor technology. IBM shares its chip designs with other companies via the OpenPOWER consortium. The processor is manufactured by Samsung Electronics, using a process similar to the 7-nanometer technology used by Advanced Micro Devices (AMD), whose chips are manufactured by Taiwan Semiconductor Manufacturing.

This expansion of the IBM Power10 family with the new midrange and scale-out servers brings high-end server capabilities throughout the entire product line. The latest offerings support critical security features including transparent memory encryption and advanced processor/system isolation and in the future they will support IBM’s leading edge quantum cryptography. The newest midrange and SMB models leverage the OpenBMC project from the Linux Foundation for high levels of security for the new scale-out servers.

“Today’s highly dynamic environment has created volatility, from materials to people and skills, all of which impact short-term operations and long-term sustainability of the business,” Sibley says. “The right IT investments are critical to business and operational resilience. Our new Power10 models offer clients a variety of flexible hybrid cloud choices with the agility and automation to best fit their needs, without sacrificing performance, security or resilience.”

The new midrange E1050 and entry level S1014 systems are optimized to run essential workloads like databases and core business applications. An expanding ecosystem of solutions used in conjunction with Red Hat OpenShift “enables IBM to co-create with clients, connecting critical workloads to new, cloud-native services that maximize the value of their existing infrastructure investments and accelerate ROI on new projects,” Sibley notes.

The IBM executives emphasized that all the Power10 servers are engineered for high reliability of “five and six nines” (99.999%, 99.9999%) of uptime and availability.

The Power10 line also delivers the most advanced IBM security to date; it leverages the inherent analytics and AI capabilities of IBM Watson services. Watson helps organizations predict future outcomes, automate complex processes, and optimize employees’ time. All of the Power10 models feature built-in built in fast recovery and self-healing capabilities and advanced features like workload isolation to protect the servers and the business from security attacks.

IBM has also embedded the latest transparent memory encryption security to protect data in memory. With 4x more encryption accelerators in every core compared with prior Power Systems models. Sibley says customer data is secured “from the core to cloud.”

IBM Power Systems along with the IBM Z mainframe deliver the highest levels of server reliability and uptime and the strongest security among 17 mainstream server distributions according to the latest independent survey data from ITIC, a research and consulting firm based in the Boston, MA area. The ITIC 2022 Global Server Hardware, Server OS Security survey polled 1,550 customers worldwide from January through June 2022 on server reliability and security.

Over the last 12 months, the IBM Power10 servers recorded just one minute of per server/per month unplanned downtime or server outage. This is a reduction of 0.42 seconds of downtime compared with ITIC’s 2021 survey results. 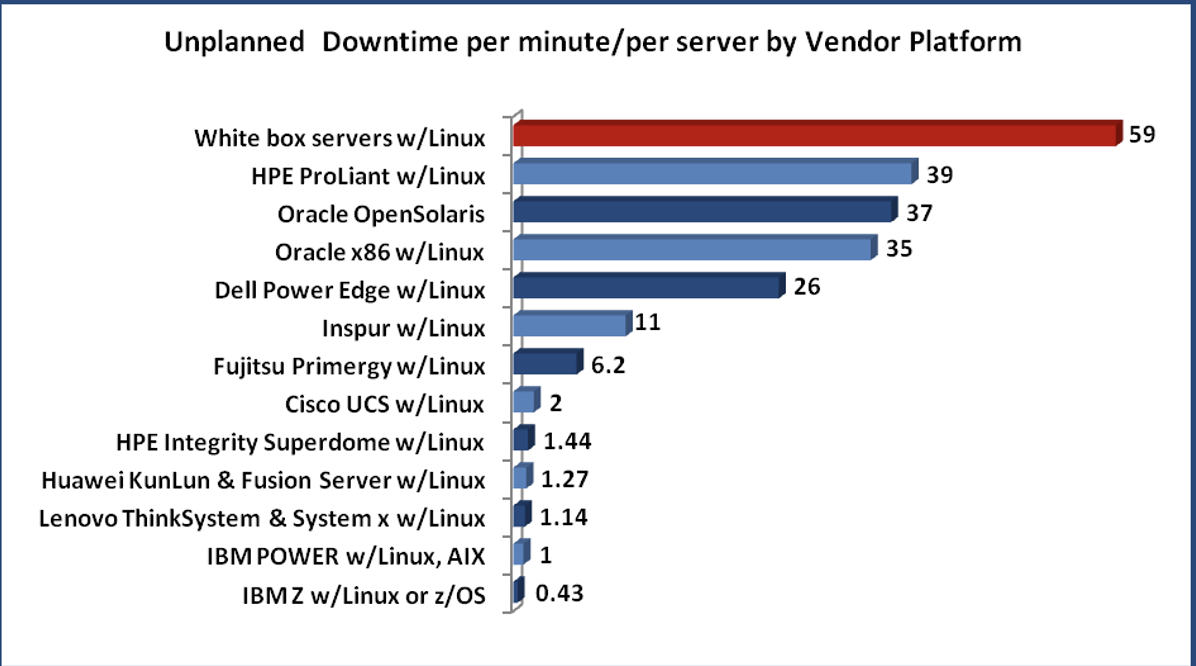 The increase in reliability is significant because a single hour of downtime costs 91% of organizations upwards of $300,000.

ITIC’s survey data found that standalone Power Systems servers experienced just one successful security breach per server over the last 12 months. And in 95% of cases, IBM IT and security administrators were able to identify, isolate and repel the hacks within one to 10 minutes.

The aforementioned reliability and security statistics are crucial for SMBs and enterprises in verticals like banking and finance; government, healthcare, manufacturing, pharmaceutical and transportation where IBM hardware is strongly entrenched.

Rob Enderle, Principal Analyst at the Enderle Group a Bend, Oregon-based advisory firm that focuses on hardware infrastructure, cloud and AI, extolled the performance, security and scale-out capabilities of the new Power E1050 and S1014 servers.

“The latest IBM Power10 hardware is a solid effort that will help the Power Systems line to survive, thrive and grow. The Power servers are one of the greatest, under-appreciated values in terms of cost, performance and security in the industry,” Enderle notes.

“IBM Power10 servers deliver indisputably superior performance, scalability and security at a very economical price point,” Enderle adds. At the same time, Enderle says, in order to maximize growth in specific vertical markets like banking/finance, healthcare and government that typically run heavy workloads IBM must expand its presence.
Ecosystem partners such as SVA provide examples of how the IBM ecosystem co-creates with clients to build hybrid environments, connecting essential workloads to the cloud to maximize the value of their existing infrastructure investments.

One IBM ecosystem partner is SVA System Vertrieb Alexander GmbH based in Germany. Udo Sachs, Head of Competence Center Power Systems at SVA System says his organization’s customers have long appreciated the flexibility of IBM Power systems through CuOD features in the Power servers for many years. “The flexible consumption models using prepaid capacity credits have been adopted quite extensively, and now the monthly pay-as-you-go option for the newest scale-out models makes the platform even more attractive,” Sachs says. On the automation front, Sachs notes that the IBM Power10 enables the company to “roll out complex workloads such as entire SAP landscapes at the push of a button by supporting Ansible on all OS derivatives, including AIX, IBM i and Linux, as well as ready-to-use modules for deploying the complete Power infrastructure.”

Enderle adds that IBM partners need to step up and promote the Power10’s many performance, reliability, security and cost efficiencies. “It’s essential that IBM enlist its third-party ISV partners onboard to raise the Power10 visibility and promote the servers. With this announcement, IBM is headed in the right direction,” Enderle says.