Liam Allan discusses his new career path as an IBM i developer, and Steve Will highlights how this hiring decision emphasizes IBM’s investment in the future of IBM i

In Liam Allan's new job, he's filling a most familiar role, that of IBM i advocate.

Allan, a user and creator of modern application development tools and open-source technologies and all-around people person, is now part of the IBM i development team. He officially becomes an IBM employee on July 1.

Allan is not sure how this career move will change his day to day work life, but his transition to IBM is significant, as Steve Will, chief architect for IBM i and Distinguished Engineer, explains.

"Liam has real-world experience with IBM i clients, and all along he's been sharing that with members of our team. Folks like Tim Rowe and Jesse Gorzinski have worked with him extensively," says Will. "But now he'll be part of the team and he'll be able to see the whole picture from the inside."

Allan concurs, noting that he and IBM developers, in their respective roles, have always prioritized the needs of IBM i clients.

"Collaborating with the same people, but in a more formal way, will be nice. It's tough to work with people when they can't share everything," he says. "I've had the opportunity to see it from the customer perspective and the problems they're facing. Now I can take that knowledge inside, with the understanding of where the platform is headed. I'm very excited about that."

Will adds that Allan's hire is part of a broader effort to bring experienced professionals aboard to work on IBM i. As a general business principle, IBM has always sought to add recent IT grads to its workforce, and this mandate certainly extends to the IBM i development team. But with the green light of corporate leadership, it's now possible to cast a wider net.

"IBM has given us permission to hire people to create the next generation of developers on the operating system and all the associated software. That represents a huge investment on IBM's part," Will says. "We've been given this opportunity because IBM is trying to be more adaptable to the current marketplace. We have needs and there are folks with key skills who we can utilize right away. While Liam is the best-known name of the people we're hiring, all these experienced professionals will be able to jump right in."

A Quick Word About Code for IBM i

With Allan joining IBM, it's natural to wonder what will become of his most prominent development creation, Code for IBM i. While Will says that the development team will explore options for incorporating the solution's code base into current and future modernization initiatives, Code for IBM i will remain freely available.

"We're happy to have the creator of Code for IBM i on our team, but we did not hire Liam for Code for IBM i," says Will. "IBM i, as a community, as a platform, grows when people modernize their applications, and there are lots of ways to do that. Code for IBM i fills a need in this space and we want to make sure that it continues."

A Snapshot of the Future

For all his contributions, Allan remains a relative newcomer to the IBM i community. It was only six years ago that Allan attended his first COMMON. During that 2016 conference in New Orleans, he took a photo with Will—the one you’ll find below. 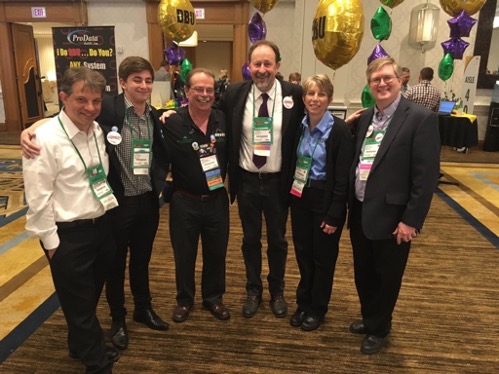 "It's impressive to me that it's only been six years that I've known Liam, and now we finally get a chance to work together as closely as I'd hoped when we initially met," says Will. "I really want everybody to understand that anything they want to do with an IT platform, they can do on IBM i. You just have to find the folks like Liam, and Jesse and Tim, who know the path forward with modern technology."

Allan too is looking forward, not just to his own future but to what's in store for IBM i and its loyal users.

"Even in the last two years, at least in my world this platform has grown significantly," he says. "Really what I want to do is help. Help IBM, and help IBM i customers achieve their goals. I want to be an advocate and I'll continue to be an advocate for this technology that I use all the time."