Despite a growing focus on DEI initiatives across STEM, the ITIC 2022 Sexual Harassment, Gender Bias and Equal Pay Survey has revealed key areas for growth

Diversity, equity and inclusion (DEI) initiatives are on the rise as part of a concerted effort to make historically male-dominated industries more egalitarian, accessible and welcoming to women. There’s no doubt women have made great strides. However, there is still much to be done to quash sexual harassment, achieve an unbiased work environment and level playing field. Organizations must identify and directly address key areas needing improvement. This is no easy task. It requires persistence and the willingness to confront uncomfortable situations.
Nearly two-thirds—62%—of women working in science, technology, engineering, and mathematics (STEM) professions claim they’ve experienced workplace sexual harassment and a 54% majority alleged they were subjected to multiple instances of harassment at various jobs throughout their careers.

One of the most troubling statistics is that 23%, or two-in-10 survey respondents, alleged they were the victims of more serious harassment such as forcible physical advances, ranging from touching, groping and outright sexual assault including rape.

The study also found that gender bias allegations were even more pervasive than sexual harassment claims. Some 71% of women STEM professionals asserted they were the victims of unfair treatment. Survey respondents said workplace gender bias issues included being passed over for promotions or pay raises in favor of men who had the same job title and level of experience; positional bias such as segmenting jobs on the basis of gender; inappropriate interview questions on topics like marital status and intentions on having children.

ITIC’s definition of gender bias includes a wide array of inequitable activities, such as women being passed over or otherwise denied promotions on the basis of their gender, coping with hostile work environments as they sought advancement in traditionally male-dominated STEM verticals, losing out on pay raises to less-experienced or less-qualified male counterparts performing similar duties, having promotions delayed or derailed when they took more extended family leave after giving birth, and having their contributions ignored or demeaned because of their sex.

In essay comments and first-person interviews, many survey respondents also described being humiliated in staff meetings by being told they “didn’t belong” in certain jobs, like science and engineering, specifically because of their sex, despite well-documented qualifications.

On the issue of unequal pay equity, 39% of women STEM professional respondents alleged they are paid less than male counterparts who perform comparable duties and hold the same job title. However, a nearly equivalent 37% of survey participants said they were “unsure” if they were paid less than male counterparts. The remaining 24% of respondents indicated they were not paid less than their male coworkers for performing the same duties. Pay equity is the one area of workplace discrimination that remained fairly constant, with no percentage changes over the last three years in ITIC’s prior 2019 and 2021 surveys. 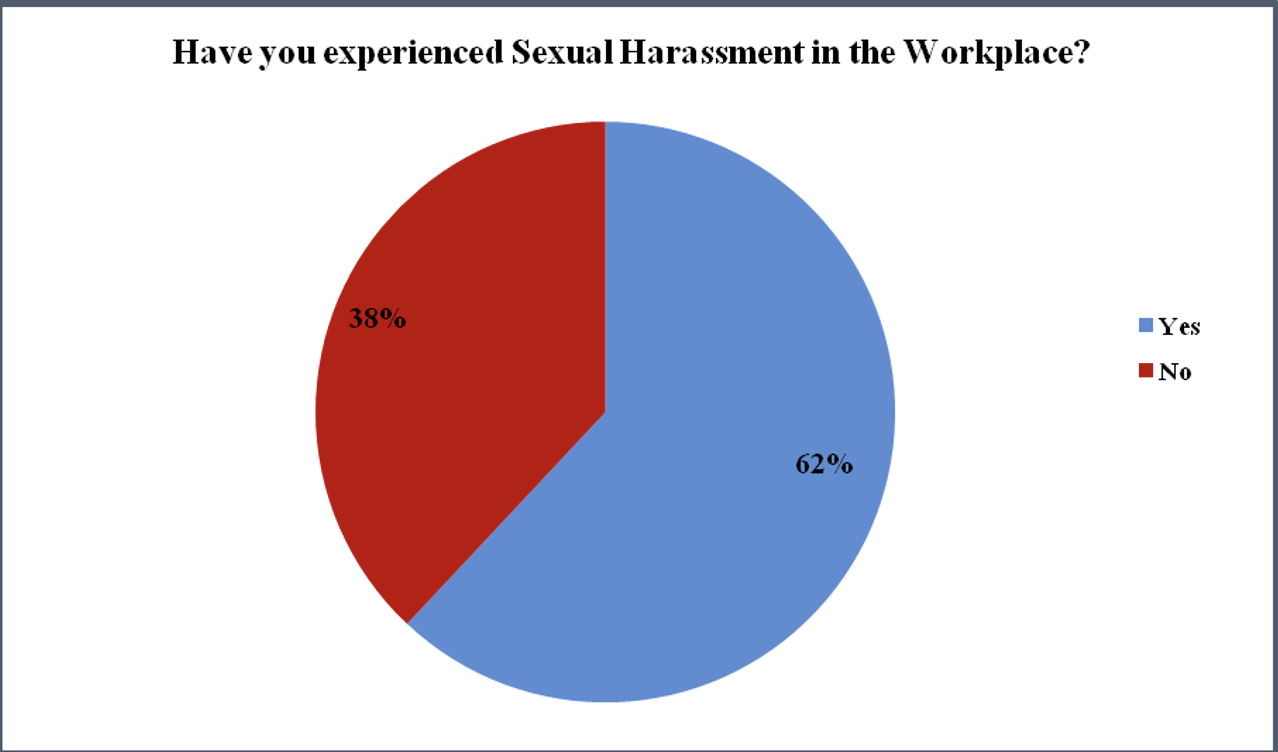 ITIC’s 2022 study asked women to specify the various types of workplace sexual harassment they experienced throughout their careers (See Exhibit 2).

Of the 62% (1,116) of the total 1,800 respondents who alleged workplace sexual harassment, 71% (792) cited off-color jokes and offensive language as the most common occurrence.  That was followed by 54% (603) who claimed they were pressured by male peers and bosses to have sex in exchange for a raise or promotion, favorable employment review or, in a worst-case scenario, as a condition of keeping their jobs.

Based on a sample size of 1,116 women representing 62% of STEM respondents who claimed they experienced workplace sexual harassment. 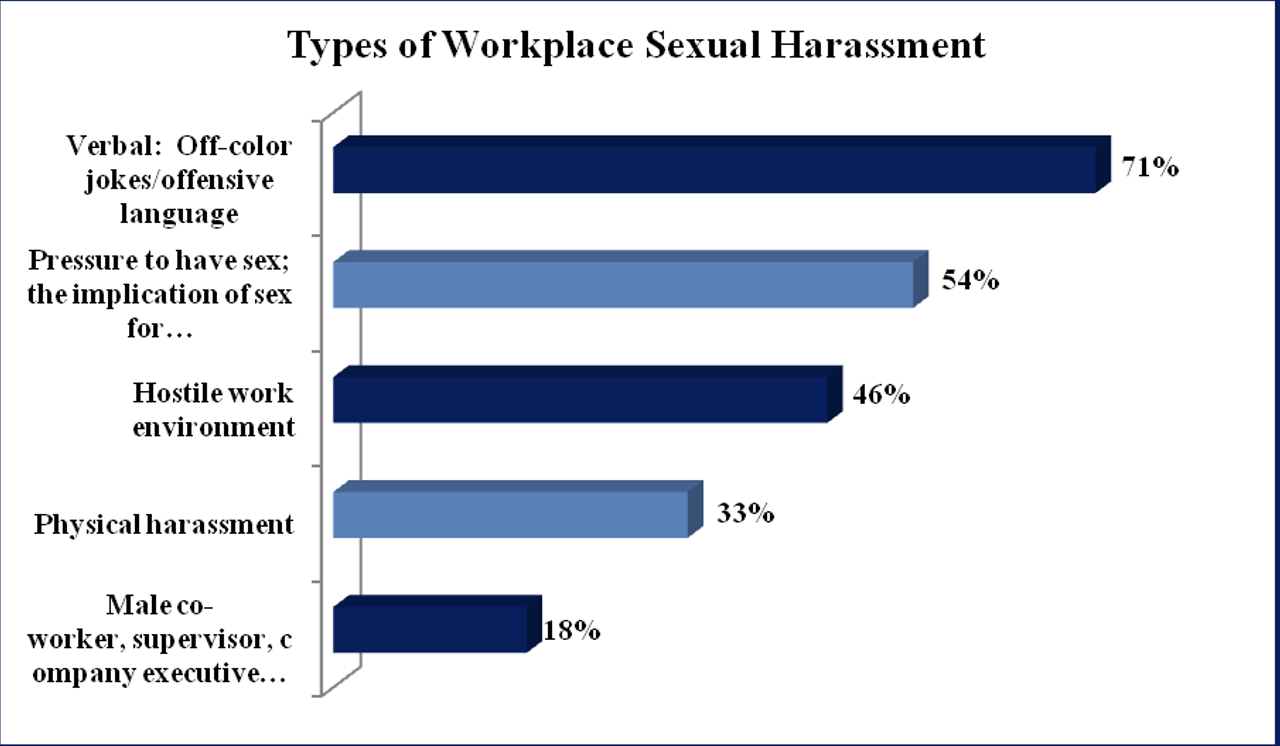 Among the other survey highlights:

Despite the grim statistics, progress is being made.

The “Me Too” movement that started in 2017 with many famous women coming forward to tell their stories of sexual harassment at the hands of Hollywood producer Harvey Weinstein sparked a reckoning. Most corporations now conduct sexual harassment training.

“It will help us fix a broken system that protects predators and corporations and will help to end the days of silencing survivors,” says Sen. Kirsten Gillibrand, D-NY, who co-sponsored the legislation said in a public statement last month. Gillibrand and other lawmakers noted that over 60 million Americans were formerly constrained by forced arbitration provisions in employment contracts.

Despite these encouraging initiatives, ordinary working women and even women STEM executives still face an uphill battle when they opt to file formal workplace harassment and gender bias claims compared to their rich and famous counterparts.

“I’ve been fortunate,” Dames acknowledged. “But one day I did notice someone had a poster up in the office that I felt was insensitive. I spoke with the person directly and asked if they understood how it could be offensive and they took it down,” she said.

Unequal pay is oftentimes hard to determine since the majority of employees don’t openly discuss salaries and bonuses. However, Dames said some years ago, a supervisor contacted her and said they’d identified an inequity in her pay and proactively rectified it. “If they hadn’t told me, I wouldn’t have known, so again, I was lucky.”
Dames’ advice to women and men who experience sexual harassment, gender bias or unequal pay is to document everything, and meet with the appropriate parties to discuss or report the issue, if warranted. Above all, Dames says, it’s important to deal with everyone in a straightforward and respectful manner.  “I recognize it can be tough and often uncomfortable to raise issues. Sometimes people make mistakes and are unaware that their words and actions may be offensive,” she says, adding, “Honesty is the best course of action. If you say nothing, there will be no resolution.”

Greg Lotko, General Manager and Senior Vice President of Broadcom’s Mainframe Software Division, says that organizations need to go from awareness to preparedness. Broadcom, he notes, has a “zero tolerance” policy towards sexual harassment and discrimination, and will not allow retaliation of any kind toward employees who report issues.  Broadcom, like many high technology firms, conducts mandatory training on what constitutes sexual harassment, a hostile work environment and gender bias.

“People need to feel safe in the workplace and to be able to move forward on a fair and level playing field,” Lotko says.  At the same time, there is a “Catch-22” as well, since concretely displaying you'll do the right thing is predicated on the presence of an issue happening that needs to be addressed,” he adds.  Lotko says Broadcom monitors its programs and policies related to employment decisions and equal opportunity, including an annual analysis of the company’s affirmative action programs and policies, as well as the company’s annual compensation programs, internal mobility and workforce management, to identify and address areas of potential improvement.

Lotko queries the people in his group and says if anything doesn’t look quite right “we discuss those individuals as a Leadership team to ensure the right outcome.”

He adds that the pay scale in his group at Broadcom is more equitable and that women now account for an increasing number and percentage of promotions. “We still have a way to go because if 30% of [the workforce] is women and 70% are men, and all you do is keep them equal you’ll never create more of a balance.”
[1] “Ending Forced Arbitration of Sexual Assault and Sexual Harassment Act,” URL: https://www.congress.gov/bill/117th-congress/house-bill/4445/text

Community ‘When Your Employees Are Thriving, Your Business Is Thriving:’ Why DEI Strategies Should Be a Business Imperative →
Community Diversity You Cannot See: A Special Event on Neurodiversity in the Mainframe Workplace →
Systems management Configuring MQ on iSeries →